Mahama Yells Out; Akufo-Addo Has Denied Me My Entitlements As An Ex-President

By @NanaKwame (self media writer) | 4 months ago 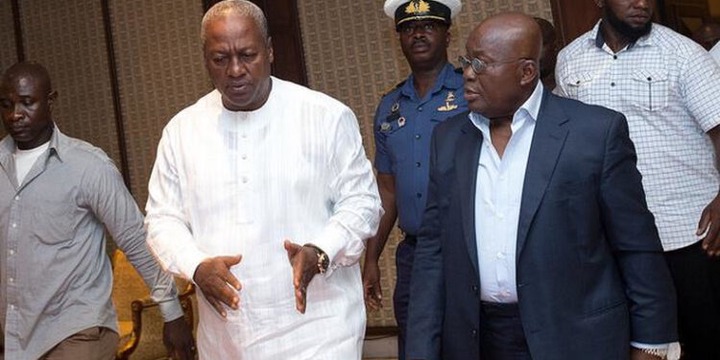 Former President John Mahama has said that the Akufo-Addo-led administration has refused to provide him the benefits to which he is entitled as the former head of state.

He claims that the government has denied him the right to receive benefits like free utilities, which he is entitled to because he has held the nation's highest post.

Last Monday, the former president's office denied allegations that he accepted an ex-gratia payment of GHC 14 million in 2013.

The former President "never collected any such ex-gratia payment of GH14 million in 2013 or at any other time throughout his 25 years of service," according to a statement signed by Special Aide Joyce Bawah Mogtari.

The office was responding to claims made by Kwame Baffoe, also known as Abronye DC, and the Bono Regional Chairman of the New Patriotic Party (NPP).

In an interview with TV3, former president Mahama stated he had to pay his expenses, which the government was supposed to cover.

I just get a monthly pension, just like President Kufuor and President Rawlings did up until their deaths. I pay the water and energy bills for my home and office, and since I own my place of residence, the state does not reimburse me for housing costs. They haven't provided me with an office, so I rent one in East Cantonments and pay the rent on my own. I buy my fuel; it's not provided by the government. My domestic help is paid. I am responsible for paying all of my expenses, including my wife's and my airline tickets when I travel. I am currently traveling tonight. So he stated all of that.

Yes, someone provided him what we are entitled to, Mr. Mahama continued, but they are not doing it for me. Most probably, they are doing it for President Kufuor. Parliament typically agrees on what should be done for you when you leave office, but it isn't being done for me. I don't receive any medical, water, or electricity.

The State is compelled to pay "40% of [his] income monthly" rather than allowing him to return home with a fully furnished residence in Accra and another place of his choosing outside the capital.

This is a departure from the Chinery-Hesse Committee Report (2001-2005), which stated that former presidents should be given "one fully furnished residence in the national capital and one out-of-capital residence at a location of the former President's choice; all of which should not revert to the state in the event of the demise of the former President." There are two cars for security.

President Mahama is entitled to two vehicles, a chauffeur, maintenance, full insurance, and replacement every four years for the rest of his life as far as transportation is concerned.

The state will cover the whole cost of any such visits for official business, including the president's spouse and two security personnel.

However, the state will only fund two of these trips a year, and they must be under two weeks long. Both the president and his wife will be eligible for free medical treatment.

The payment of utilities at his home is one of the additional benefits.

This was stated in the report by the Presidential Emoluments Committee on the working conditions for Article 71 office holders.

Professor Dora Francisca Edu-Buandoh of the University of Cape Coast served as the chair of the Committee, which was established under the Constitution of 1992, along with four other members.