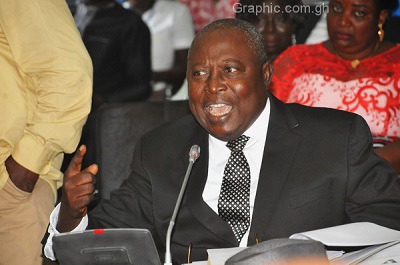 The former Special Prosecutor, Martin Amidu has not lost his sense of humour and critique on issues that bothers on nationalism and social justice. Politically, he became an enemy to the Presidency when he sensed the interference in his work threatened the independence of the Office of the Special Prosecutor (OSP). He was so determined from the date he took the oath to act diligently and in the spirit of the constitution, to build a stronger anti-corruption institution as the OSP but sadly bowed out to save his 'skin'.

Martin Amidu exhaustively penned a 25-paged reply to the Office of the President over some counter claims and accusations made to his resignation letter. The attitude as could be inferred from the content of his response simply indicates how emotive the Citizen Vigilant has become.

In all the 72 point responses raises in his letter, it was simply tempestuous to say the least, how he focused his lenses on President Nana Addo Dankwa Akufo-Addo. Though detailed, it re-echoed what he had stated in his resignation letter to the President and the press statement issued along it.

But what interests me most and should be of interest to any Ghanaian is his final remark or conclusion in his latest epistle. Martin Amidu clearly stated that he's ever ready to risk his last breathe to make corruption a high-risk enterprise in Ghana

"The heavens can come down, I will defend the Constitution against suspected corruption and ensure that corruption is made a high-risk enterprise with the last drop of my blood. Ghana First!," he stated categorically.

It is no wonder he had reverted to his old title; "Citizen Vigilante". But beware, this is a man who single handedly took on the Wonyome Scandal and several others. He's a radicalist, and could even trigger a legal action into the findings he's documented in the Agyapa Royalties Limited Transaction Corruption and anti-corruption risk assessment report.

It's worthy to note that his former office had already initiated some investigation into other corruption scandals such as the Charles Bissue Galamsey Fraud, the Adjenim Adjei PPA-Contract for Sale Scandal, and many others.

Having sworn to deal with any scandal he find convenient, Martin Amidu should be expected to nail harder with his 'mallet' on any of these cases but trust me, he may start off with he Agyapa Royalties Deal if he realises the red flags he noted are not dealt with.