By BeaNana (self media writer) | 2 years ago A senior lecturer at the department of political science at the University of Ghana, Professor Ranford Gyampo has finally shared his opinion on the ongoing attacks by members of the western Togo land separatists’ group in the Volta Region.

The group has for the past one week caused troubles in the Volta Region by attacking a Police station and blocking roads.

Just today, they have attacked the STC office in Ho and have burnt some burses belonging to the State Transport Company.

Security experts in the country have condemned the act and have called on government and the various security operatives in the country to act before the issue gets out of hand.

Government on the other hand has indicated that, they have intelligence and the issue will soon be brought under control.

Some of the group members have been arrested and are facing trials in the courts. One influential critic in the county, who has remained silence over the issue is Professor Ransford Gyampo.

He has however broken his silence by making a post on his Facebook wall few minutes ago. Professor Gyampo indicates, what is happening has a history which dates back to the 1950s, where an election was held and the current group lost in a plebiscite.

He indicates that after losing 42 percent of the votes, they have now decided to form a government which is no acceptable.

“People are calling me to say something about the secessionist attempt. Please search the 1956 trans-Volta Togoland Plebiscite and look at the results. Pay attention to the group that said no at the time. But lets all think about this where do you think Ghana will be heading towards to if a group loses an election and decide to form a government after obtaining 42 percent as against the winner who had 58 percent. Plebiscite is also a type of election. Most young people will not understand what I have enumerated but that is the fact” Professor Ransford Gyampo noted on his official Facebook wall. 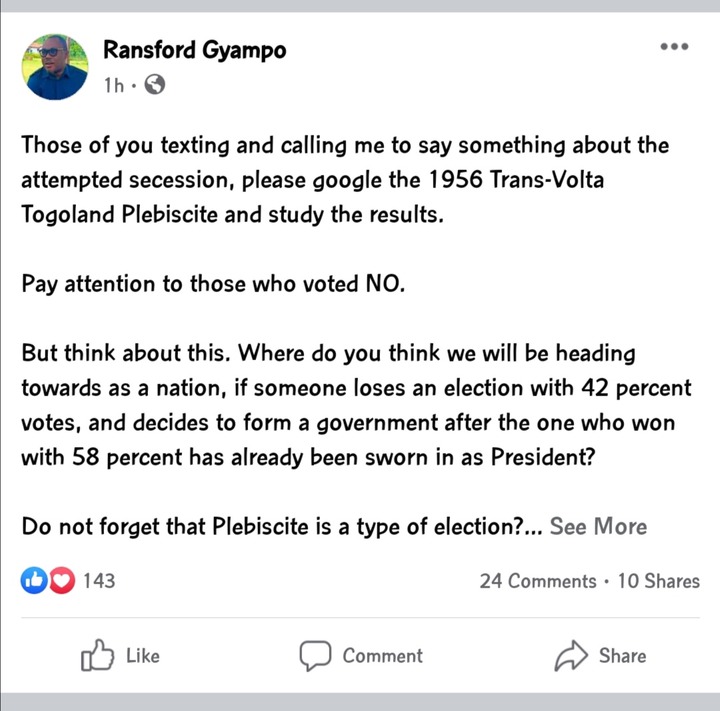 There is currently heavy security presence in the Volta Region to bring the issue under control.