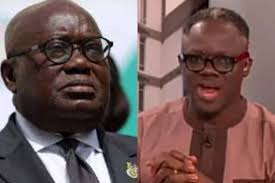 The host of the Newsfile show, Lawyer Samson Lardy Anyenini, has stated and admitted some bold facts on live show. Samson Lardy Anyenini revealed like Captain Smart did, that he was amongst the people who joined Nana Addo's crusade to collapse Mahama's government in 2016. He later stated boldly that he is seeing more than enough of what pushed him and the others to vote Mahama out in this current administration.

"We see an abundance of the very things we joined you to crusade against to collapse Mahama’s Government in 2016. Your appointees and party people defending the naked rot, now impervious to advise and criticism, were constantly on this show over these issues."

Samson Lardy Anyenini later addressed the issue about him intending to make a comment about coup against this government. He stated that he is strongly against coup. He added that impeachment of Nana Addo is impossible but what is possible is that Ghanaians can collapse his regime.

"You know I don’t believe in that, and my firm conviction, which I have expressed publicly, is that our democracy will never witness such again.

"I doubt the possibility of impeachment of a Government (President) that’s not accountable so long as our Parliament remains what it is. But I believe in collapsing such a regime at the polls.", he explained.