Kennedy Agyapong Fires Back at Suhuyini For Terming Him a Coward: Privileges Committee Saga

By Wysopera (self media writer) | 9 months ago 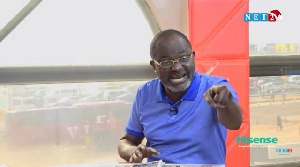 The Assin Central Member of Parliament, Kennedy Agyapong has responded massively to the label placed on him as a coward by Alhassan Suhuyini after he has refused to appear before the priveleges committee.

He was accused of contempt of parliament and was supposed tmeet the privileges committee this August, but he failed to do so. The Member of Parliament for Tamale South was the one who initiated the move for Kennedy Agyapong to be brought before the committee, and therefore; he berated him for not coming.

Suhuyini made it clear in his speech in respect to Kennedy Agyapong's refusal to appear before the committee that he thinks it was an act of cowardice on the part of the Assin Centra Parliamentarian. He stated, "I think it amounts to an act of cowardice...".

Speaking on Net 2 TV in a program duped, "The Attitude ", Kennedy Agyapong made time to respond to the comment by Suhuyini. He stated, "I'm running, who the hell is he for me to run from?"

Although the program was not related to the Privileges Committee, Kennedy Agyapong made it clear that he was not running away, and for that matter, he is not a coward.

Do you think that Kennedy Agyapong was afraid of the Committee and that was why he did not appear before it?