Election 2020: Mahama Should Stop Blaming Jean Mensa And Prepare For The Future.

By Nuubey (self media writer) | 1 month ago

The extend at which the NDC 2020 presidential candidate and former president is dragging the issues of the previous elections is becoming unbearable overtime. Yes, even before the election, it was expected that they would be a winner and a loser since they are casualties in every war. And so, the constant blame on the electoral commission is neither here nor there.

On the election day, the NDC party itself had polling station agent who watched over the election and agreed upon the various results. At the national level as well, the umbrellas family was fully and adequately represented by competent people. How then was the electoral commission able to still the election?

And when you were dissatisfied with the election results and proceeded to court, you were again represented by competent lawyers and experienced witnesses yet it didn't yield the expected results due to lack of evidence of your petition.

However, former president Mahama seems not to be satisfied with all these developments after the election as he keeps blaming Jean Mensa for not conducting a fair election. Just Today, on his thank you tour to the Eastern region, he criticised Jean Mensa again for saying that she has conducted the best election ever in Ghana.

According to John Mahama, if Jean Mensa was confident that she really conducted the best election why did she run away from the witness box when she was called to answer questions? Speaking to the chief of Heman and his people he said; the previous election petition is not the first of its kind in Ghana. And so in the last election petition, Asiedu Nketia (General Mosquito) and Afari Gyan mounted the witness box to answer questions.

"If you say the previous election is the best conducted election, why did you run away from the witness box? We had election petitions before and that's not how we do it. In the last election, General Mosquito and Afari Gyan mounted the witness box to answer questions. But this year all our applications were 7:0 "

All in all, it is advisable for the former president to move on, forget the previous election and prepare well for the future. Because the NPP also had a share of the defeat especially in parliament. 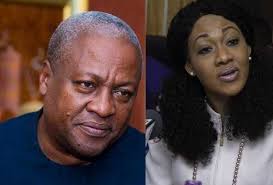