By Ghnews.hub (self media writer) | 9 months ago

With the exception of South Africa and Cape Verde, lesbian, gay, bisexual, transgender (LGBT) rights in Africa are limited in comparison to Western Europe and much of the Americas and Oceania. 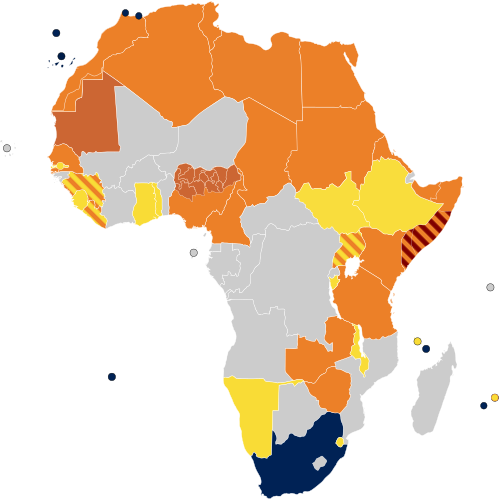 Homosexuality legal but no recognition

Legal in all 8 territories

Legal in 3 out of 54 countries

Legal in 7 out of 8 territories

Allowed to serve openly in 1 out of 54 countries

Allowed in all 8 territories

Protected in 7 out of 54 countries

Protected in all 8 territories

Recognized in 1 out of 54 countries

Recognized in all 8 territories

Same-sex marriage constitutionally banned in 9 out of 54 countries

Out of the 54 states recognised by the United Nations or African Union or both, the International Gay and Lesbian Association stated in 2015 that homosexuality is outlawed in 34 African countries. Human Rights Watch notes that another two countries, Benin and the Central African Republic do not outlaw homosexuality, but have certain laws which apply differently to heterosexual and homosexual individuals.

Since 2011, some developed countries have been considering or implementing laws that limit or prohibit general budget support to countries that restrict the rights of LGBT people. In spite of this, many African countries have refused to consider increasing LGBT rights, and in some cases have drafted laws to increase sanctions against LGBT people. Some African leaders Who claim that it was brought into the continent from other parts of the world. Nevertheless, most scholarship and research demonstrates that homosexuality has long been a part of various African cultures.

In Somalia, Somailand, Mauritainia and northern Nigeria, homosexuality is punishable by death. In Uganda, Tanzania, and Sierra Leone, offenders can receive life imprisonment for homosexual acts, although the law is not enforced in Sierra Leon. In addition to criminalizing homosexuality, Nigeria has enacted legislation that would make it illegal for heterosexual family members, allies and friends of LGBT people to be supportive. According to Nigerian law, a heterosexual ally "who administers, witnesses, abets or aids" any form of gender non-conforming and homosexual activity could receive a 10-year jail sentence. The Republic of South Africa has the most liberal attitudes toward gays and lesbians, as the country has legalized same sex marriage and its constitution guarantees gay and lesbian rights and protections. South Africa is the only country in Africa where any form of discrimination against the LGBT community is constitutionally forbidden. In 2006, South Africa became the first country in Africa and the fifth in the world to enact same-sex marriage. However, despite this protection, social discrimination against South African LGBT people does still occur, particularly in rural areas, where it is fueled by a number of religious figures and traditions. Discrimination is , however, far rarer in bigger cities, and there are large LGBT communities in cities like Johannesburg, Cape Town, Durban, Pretoria, Port Elizabeth, East London, Bloemfontein, Nelspruit, Pietermaritzburg, Kimberley and George. South Africa's three largest cities, Johannesburg, Durban and Cape Town, are considered fairly accepting of the LGBT community and are promoted as tourist destinations for LGBT people. Spanish, Portuguese, British and French territories legalised same sex marriage.

For their own safety, gay and lesbian travellers have been encouraged by some to use discretion whilst in Africa, including advice to avoid public displays of affection (advice which applies equally to both homosexual and heterosexual couples). South Africa is generally considered to be the most gay-friendly African country in respect of the legal status of LGBT rights, although Cape Verde is also frequently regarded as being very socially accepting of LGBT rights, as described in the documentary Tchindas.