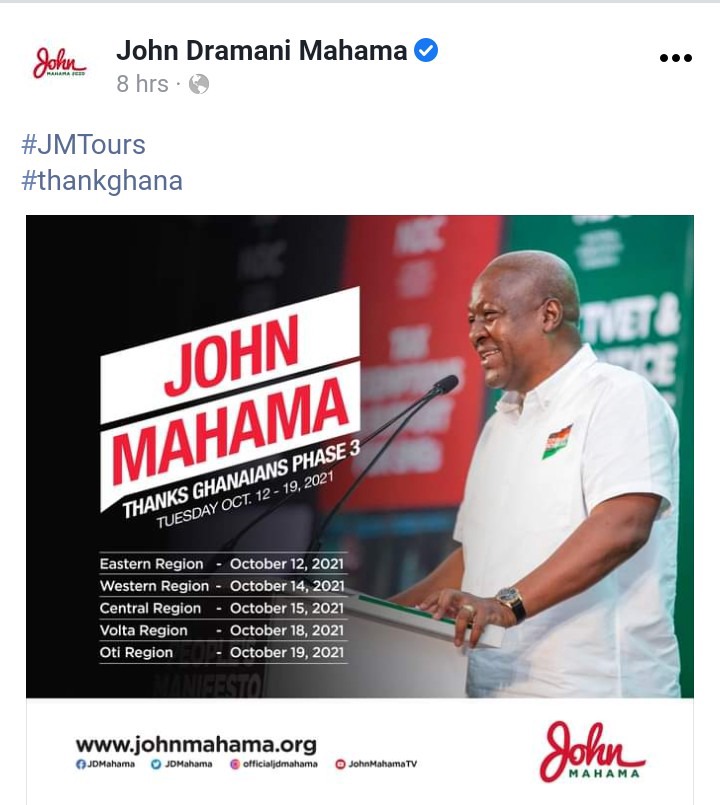 His Excellency John Dramani Mahama, Former President of the Republic of Ghana is one of the very few politicians who understands and practice democracy. This he showed in 2016 when he lost the election but handed over peacefully. Wow, these are the leaders we need in Africa. He contested again in the 2020 general elections and lost to the incumbent president, Nana Addo Dankwa Akufo Addo of the ruling New Patriotic Party (NPP).

Former President John Dramani Mahama is embarking on a tour to all 16 regions in the country to thank Ghanaians for their massive votes and support during the 2020 general elections, despite his loss.

Earlier this year, the former President toured some regions in the Northern sector including the Savannah, Upper East, Upper West, North East, and the Northern Regions.

Today, the Former President, His Excellency John Dramani Mahama is starting phase three of the thank you tour through to the 19th of October. Regions to tour in the third phase include the Eastern region, Western Region, Central Region, Volta Region and the Oti region.

The former President is very optimistic that victory 2024 is assured and that the National Democratic Congress (NDC) his beloved party will be crowned winner of the 2024 Presidential election and the majority in parliament.