The Deputy Minister for Lands and Natural Resources, responsible for Lands and Forestry Hon. Benito Owusu-Bio has cautioned officers of the newly inaugurated Lands Commission Regional office in the North East Region not to make the mistakes their predecessors made in the administration of Lands which has bred a number of issues for the Commission. 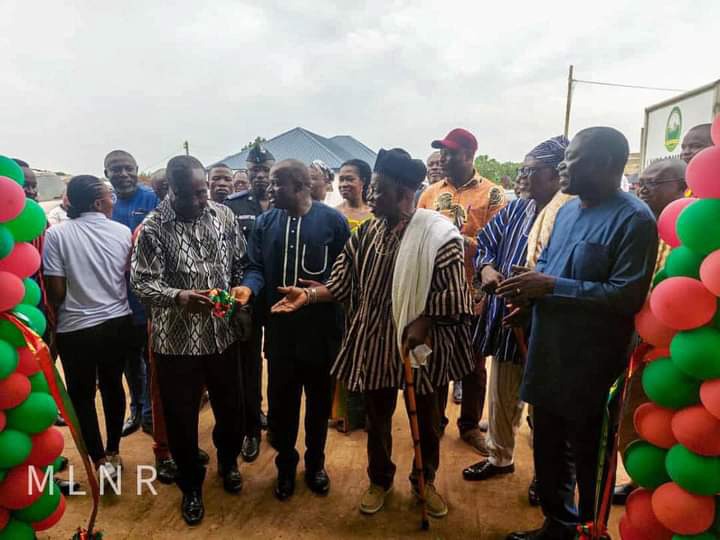 He added that they are privileged with the advantage and opportunity to start on a fresh slate and therefore urged them to begin with better planning in order not to repeat the mistakes of offices in Accra, Kumasi, Takoradi and other places.

Hon. Benito said this when he lead a team from the Ministry and the Lands Commission to the North East Region on Tuesday, 9th August 2022 to inaugurate the fifth out of six regional Lands Commission Offices scheduled to be inaugurated in the newly created regions of the country.

He further highlighted some key importance of the Lands Commission in the region saying "Lands Commission here, on behalf of the government, shall manage public lands and any other lands vested in the President by the constitution or by any other law and any lands vested in the commission, advise the government, local authorities and traditional authorities on the policy framework for the development of particular areas of the country, to ensure the development of individual pieces of land coordinated with the relevant development plan for the area concerned, among other important services".

Hon. Benito believes that the decentralisation agenda of the Lands Commission will ensure that efficient land administration services delivery is brought to the doorstep of every Ghanaian.

He noted that " What is unique about the establishment of offices in the new regions is that the offices will operate in a fully digital environment" which he said will help achieve speed and reduce the usual delays associated with processing documents in a manual environment.

On behalf of the Overlord of the Mamprugu Traditional Area of the North East Region, Na Bohagu Mahami Abduli Sheriga, the spokesperson person at the Palace, Chief Tarana, John Wuni Grumah appealed to the Board of the Lands Commission and officers of the newly inaugurated regional office to be diligent in their service delivery and let their work stand out.

Chief Grumah added that the staff should be committed to their work, exhibiting their best performance to make the Lands Commission office in the region, one of the best in the North and in Ghana.

He also appealed to these officers to be gentle with the people and Chiefs of the region with regard to collaboration in work. "The Nayiri said you should please be patient and gentle with our people. If they happen not to understand anything, please take your time and explain to them so we can all work together peaceful and collaboratively"

He assured the Commission of his unflinching support and requested that in the process of selection for new employees for the office, his subjects who meet all requirements are also given the opportunity to work.

The North East Regional Minister, and Chairman at the event, Hon. Yidana Zakariah described the importance of land as a valuable asset of every community and nation and therefore expressed his joy to see such development in his community submitted to the Chiefs and the people of the Nalerigu to come together and work collaboratively with the new officers of the Commission for the development of the entire North East Region.

The Regional Minister appealed to the Regional Lands Commission Board officers not to see themselves as owners of any land but rather work in sync with the traditional leaders to properly demarcate all stool lands and avoid double land sales which is the major problem most regions face with regards to Land administration.

He also expressed his sincerest gratitude to the President of the Republic, Nana Addo Dankwa Akufo-Addo for keeping his promise to equip the new regions with all necessary tools to function.

The National Chairman of the Lands Commission, Mr Alex Quaynor in his remarks said per the New Land Act, Act 1036, the government requires that all land owners register their Lands through the proper process and therefore hoped that the residents of Nalerigu and for that matter, North East Region will take advantage of this opportunity and do the needful for utmost development.

He added that as most lands in the country are owned by skins, stools and families, it is important that the administration of lands is properly and efficiently carried out at that level, adding that the New Land Act makes it compulsory for the Palaces to have customary lands secretariat which will ensure proper records keeping.

Mr Quaynor also called for collaborative work between the traditional authorities and surveyors in apportioning of lands to help avoid the Land guard menace in the region.

The Deputy Executive Secretary of the Lands Commission in charge of operations, Mr Benjamin Arthur in a remark indicated that the newly commissioned office has the advantage of operating in a digital space and therefore urged that they embrace the opportunity and do a better job than those who had to start from in manual environment.

He assured that the Head office will soon provide all other needed logistics and support to ensure the smooth running of Land administration in the North East Region.