Duori is a village in the Upper West Region of Ghana. It was here that on March 3rd, 1923, Simon Diedong Dombo was born. Over the course of the next 75 years, Diedong left deep imprints in every facet of his life.

Some are said to have been born with leadership traits. Others are said to have acquired leadership traits from their environment. Diedong sat comfortably in both stations. Indeed, Diedong was the nephew to the Chief, and not the heir apparent. Overlooking his own sons, Chief Bodire chose Diedong as his successor due to the sterling and desirable leadership qualities he saw in young Diedong. Diedong would later say that his lesson in selflessness was derived from this magnanimous act of his uncle, Chief Bodire. A King or Chief cutting off his own lineage to recognize superior leadership qualities in others? Surely, that takes some beating.

The above characteristics reflected in what Simon became over the course of his journey from Duori to Accra.

Chief S. D. Dombo played a pioneering role in the Gold Coast Legislative Council and the fight for Ghana’s independence. Chief Dombo represented the Northern Territories through the vehicle of the Northern Peoples Party (NPP), a party of which he was the Leader and Co-founder.

Chief S. D. Dombo became Ghana’s first official Opposition Leader in his capacity as Leader of the NPP. Upon the merger of the NPP with the other opposition parties, including the National Liberation Movement (NLM), to form the United Party (UP), Chief Dombo was elected Deputy Leader of the UP with Dr. Busia as the Leader. It was a question for students of A’ Level Government why it was that Chief Dombo, with the majority number of seats among the merged parties, did not become the Leader of the UP instead of Busia. When asked this question, Chief Dombo typically answered in the fashion that exemplified his humility, selflessness and appreciation of Party good over individual ego. He said he went to the Conference with no preconditions, and was contented to be elected Deputy to Dr Busia by the delegates.

Chief Dombo’s tireless dynamism and canvassing abilities made the opposition to President Nkrumah and the CPP become synonymous with the name Dombo. The name Dombo was bastardized, and the Opposition was called “Domo People”. This was the period when Dr Busia was away in exile, and Dombo again became the de facto Leader of the Opposition and formed the vanguard against President Nkrumah’s One Party State bid.

Three discernible characteristics of Chief Dombo were exemplified during this phase, notably:

SELFLESSNESS: Seeing the greater good of a united opposition to defeat President Nkrumah and the CPP rather than seeking personal aggrandizement. Chief Dombo did not demand by right to lead the merged parties that formed the UP even though he brought more to the table than any one of the other parties.

COURAGE & BRAVERY: At a time when the threats posed by the Preventive Detention Act (PDA) caused several politicians to either go into exile, or to cross carpet to the CPP, Dombo stood firm at very dire personal cost to his freedom and quality of life. Despite threats to his life, Dombo led the opposition to President Nkrumah.

INCORRIGIBILITY: All President Nkrumah needed for an even smoother and faster sailing into turning Ghana into a one Party State, was for the Leader of the Opposition – Chief Dombo – to cross over. However, despite lucrative inducements, including promises of high ministerial appointment, Chief Dombo refused to be intimidated or bought. Chief Dombo thereby ensured that Multi-party Democracy in the country under Nkrumah lasted a while longer than will otherwise have been the case. Chief Dombo played his part in ensuring that the ideals of multi-party democracy remained engrained and cherished in the consciousness of many a Ghanaian.

Like Dr. J.B. Danquah and other victims of the PDA, under which opponents of the Nkrumah Administration were incarcerated without trial, Chief Dombo was twice imprisoned, the last of which he served in the popularly called “condemned cells” at Nsawam Medium Security Prison.

Chief Dombo gained his freedom in the wake of the 24th February 1966 coup d’état that overthrew the government of President Nkrumah, and with it the dreaded PDA.

During the 2nd Republic, Chief Dombo was Member of Parliament (MP) for the then Lambusie-Jirapa constituency in the UW/R, having won the seat on the ticket of the Progress Party (PP), led by Dr. K.A. Busia. The Honourable Chief SD. Dombo was appointed Minister of the Interior and later Minister of Health by Prime Minister K. A. Busia.

As Minister of the Interior, Hon. Chief Dombo:

He implemented the Aliens Compliance Order that saw the unprecedented mass deportation from Ghana of illegal nationals from other countries, including Nigeria.

Oversaw the modernization of the uniform worn by the Ghana Police Force from the old Gold Coast-style tasseled red hats, khaki shorts and woolen tops to the modern style of the 1970s.

As Minister of Health, Hon. Chief Dombo effected the proliferation of Rural Clinics throughout the country. This ensured basic health care was available at point of need even in the hinterlands. These clinics were accompanied by Low Cost Bungalows to house the health personnel. This was in line with the PP government’s Rural Development Program. 44 years since 1971, in some remote villages in Ghana, these rural clinics and bungalows remain the only evidence of intervention by the Central Government in impacting their living conditions.

Chief Dombo retired from active politics after his release from custody following the coup d’état of 13th January 1972 led by then Colonel I. K. Acheampong that overthrew the PP government. It was just as well as he, along with other like Alhaji Imoru Egala, was targeted and banned from holding elected office by the Supreme Military Council prior to the 1979 elections.

Chief Dombo became an elder Statesman and a mentor to the younger generation among whom was John Agyekum Kufuor, and the late Alhaji Roland Issifu Alhassan. He helped form succeeding parties to the PP namely the Popular Front Party (PFP) and the New Patriotic Party (NPP).

A proud traditionalist, Chief Dombo was easily identifiable in his customary three¬-piece batakari smock in parliament, on campaign platforms, and even on trips abroad.

Chief Dombo spent his last few years in London with his children where he passed away on March 18th, 1998.

In 2009, the second highest body of the NPP, the National Council, deliberated and passed a resolution that formally recognized the relative contribution of various past leaders to the tradition of the United Party and its offshoot parties like the NPP. The National Council of the NPP decided that in order of impact on the UP tradition, the fixed order of recognition should be DANQUAH-DOMBO-BUSIA.

Chief Dombo is gone but his name lives on in several ways and places not least of them being the name of the political tradition he helped found: the Danquah-DOMBO-Busia tradition. Please like, comment and share. 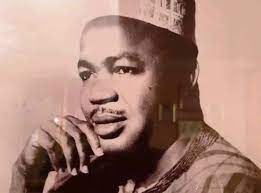 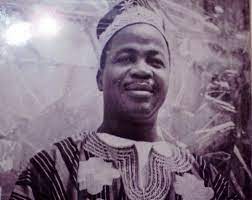 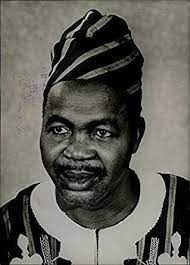