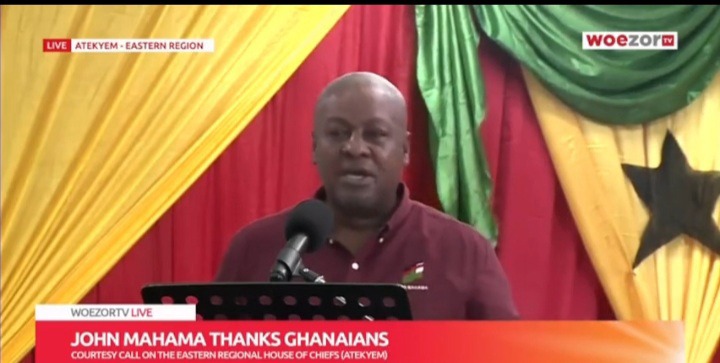 Former President of the Republic and leader of the opposition National Democratic (NDC), John Dramani Mahama has said that the records on the current economy under the Akuffo-Addo and Bawumia government have vindicated him on his performance during his tenure as the President of the country. Mahama has expresed his disappointment on the hardship the NPP government has brought to Ghanaians.

John Mahama made this comment when addressing the authorities and residents of Atekyem in the Eastern Region. Mahama resumed his nationwide Thank-you tour to express his gratitude to Ghanaians over their support in the last election. Mahama has stormed the Eastern Region to mark the first day of his tour.

Speaking to the Chief and elders of Atekyem community, he chastised the current government on the several infrastructure projects that have been abandoned in the bushes. He believes that the avoidable congestions at various senior High schools could be eliminated if government focused on completing projects his administration started. 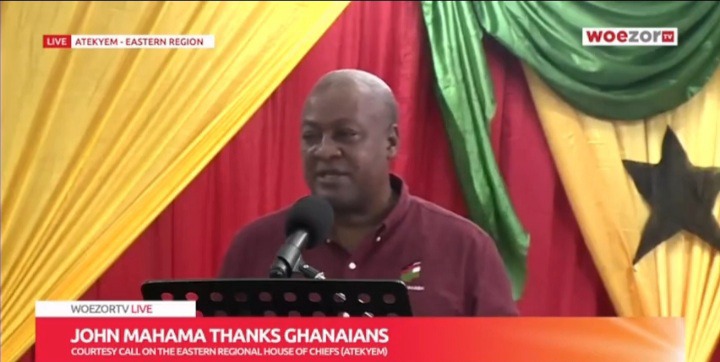 "It is a shame that you have a whole completed school and yet cannot be used. If we completed all the schools, we could at least reduce the congestion we are experiencing today. I almost cry over what is happening in the country but the records have vindicated me."

Speaking further, Mr. Mahama continued to talk about the roads that have been abandoned by NPP government. Listing several roads, he reckoned the poor nature of the Mpraeso and Asamankese road that was initiated by his government. According to Mahama, tears well up in his eyes when he reminisces the poor leadership exhibited by NPP and Akuffo-Addo's government.

"Take a look at the abandoned roads at Mpraeso and Asamankese. If there is anything worrying Ghanaians now, it is hardships and the high cost of living. If the government continues to act this way, there would be food shortage in the future," he added.

Watch the full video of his address to the Chiefs here.