I believe what Rawlings did to you: C.E.O. of Citi FM shades Kweku Baako and Elizabeth Ohene. The CEO of Citi FM/TV, Samuel Atta Mensah (a.k.a. Samens) has killed two birds with one stone as his single comment on Facebook seems to have responded to the assertions made by two veteran Journalists.

Both journalists, Abdul Malik Kweku Baako and Elizabeth Ohene who are now sympathizers of the current New Patriotic Party (NPP) regime, have cast doubt on the disclosures of the Citi Fm's journalist that, he was tortured upon his arrest by the National Security operatives somewhere last week.

Coincidentally, both veteran Journalists have had similar encounter with a brutish regime in the past, specifically, the Rawlings regime in the 1980s. The story is told of Kweku Baako who suffered inhuman treatment in the hands of Rawlings, some narrated by him and other eyewitnesses. Elizabeth Ohene on the other hand, was told to be a fearless journalist with the Graphic who fought dictatorship with her pen and had to go on exile at a point.

These heavyweight journalists are respected within the only fraternity and beyond. When it comes to the fight for media freedom, you cannot tell the story of Ghana leaving out these two.

However, like they say, power corrupt and absolute power corrupt absolutely. It is no secret these two now belong to the current governing party, and it seems their opinions these days are influenced by their biases towards their idol, President Akufo-Addo.

Back to the main meat of this article. The Citi Fm's journalist, Caleb Kudah told his story of torture a day after the incident. For this reason, Kweku Baako doubted the story. Elizabeth Ohene followed suit in similar belief.

This is where Samens's beef originates. He wonders why these journalists, who have told Ghanaians of the same story about their ordeal, now do not believe the accounts of a junior colleague when their stories had never been doubted. 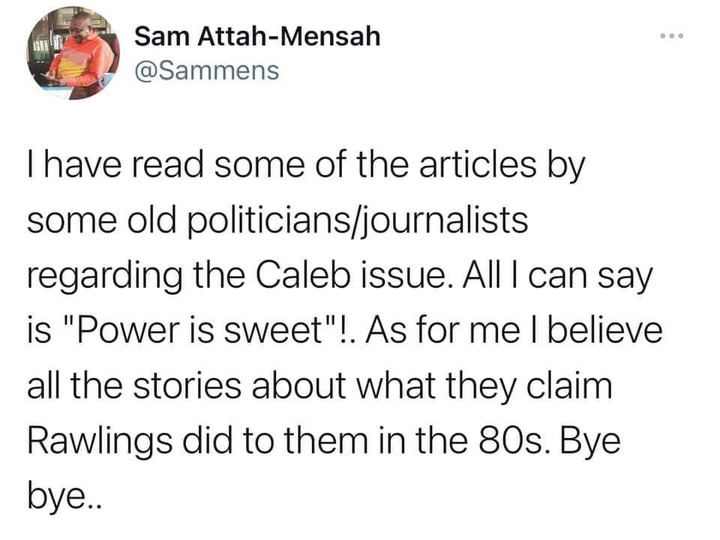 “I have read some of the articles some old politicians/journalists regarding the Caleb issue. All I can say is power is sweet!. As for me, I believe all the story about what they claim about what Rawlings did to them in the 80s”. He posted.

Apparently, he also described them as 'old politicians'. The reference to power in his post is to signal the fact that they are now in bed with the current administration and will therefore afford to doubt journalists whose report sort to give it (Government) a bad name.

There has not been response from then to Samens, even though the target of the shade is so clear. We wait to see.

Neglect, revenge and other common reasons why married women cheat

If your partner's love language is physical touch, this is how you'll make them happy always