By Obeng_News (self media writer) | 10 months ago The host of 'With All Due Respect' and founder of Loud Silence Media, Kevin Taylor has revealed the ruling New Patriotic Party government's latest plan to pass the controversial E-levy. He, therefore, sends a strong message to the minority in Parliament.

While speaking on his show on Tuesday, March 15, 2022, Kevin Taylor revealed that the NPP wants to use Chief Justice and the Supreme Court to pass the E-levy. He adds, they will bring their "ill" MP to Parliament this week when the E-levy is tabled before the House so that they will get the numbers to pass the E-levy. 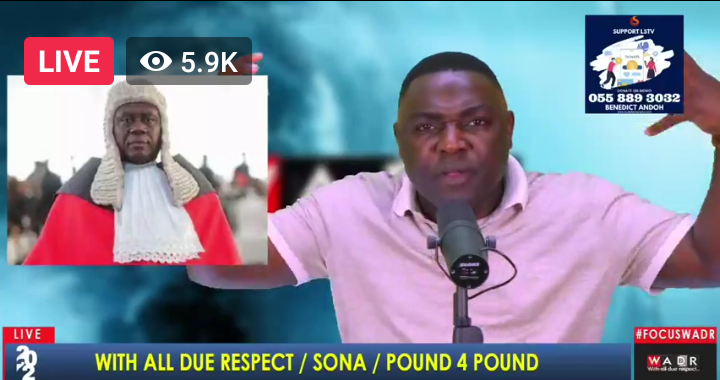 Kevin also revealed, Akufo-Addo has a plan to by all means force the E-levy on Ghanaians.

Kevin then boldly told the Minority in Parliament to walk out of Parliament if those things he's saying happen so that Ghanaians will know that indeed they are not part of the E-levy.

" The NPP has a plan to use the Chief Justice and the Supreme Court to aid them in passing the E-levy. They have also planned to by all means bring their ill MP to Parliament when the E-levy is tabled so that they can have the numbers to pass it. I know for a fact that Akufo-Addo wants to by all means force the E-levy on Ghanaians." Kevin Taylor boldly revealed.

He then went on to seriously caution the Minority not to be part of the E-levy if Akufo-Addo and his Chief Justice are bullying them in Parliament to pass the E-levy.

What's your take on the plans by the NPP and Akufo-Addo to pass the E-levy as revealed by Kevin Taylor?

Do you believe in the revelations by Kevin Taylor or do you think they are just mere talks?

What's your take on the advice given to the Minority to walk out of Parliament, do you think is the best of advice?

Please leave your comments and thoughts below and kindly share this article.