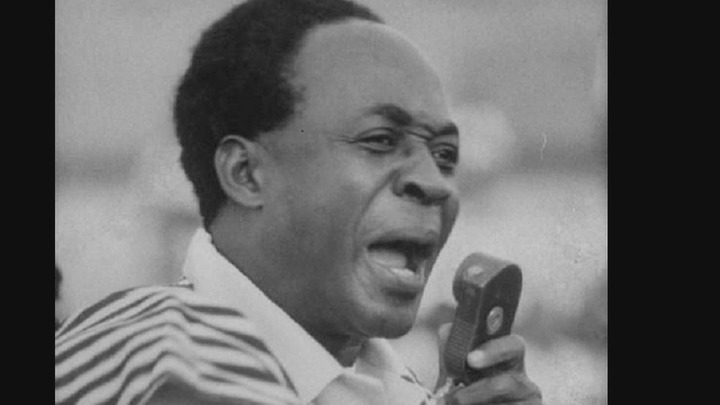 I Speak of Freedom - Kwame Nkrumah

For centuries, Europeans dominated the African continent. The white man arrogated to himself the right to rule and to be obeyed by the non-white; his mission, he claimed, was to “civilise” Africa. Under this cloak, the Europeans robbed the continent of vast riches and inflicted unimaginable suffering on the African people.

All this makes a sad story, but now we must be prepared to bury the past with its unpleasant memories and look to the future. All we ask of the former colonial powers is their goodwill and co-operation to remedy past mistakes and injustices and to grant independence to the colonies in Africa?

It is clear that we must find an African solution to our problems, and that this can only be found in African unity. Divided we are weak; united, Africa could become one of the greatest forces for good in the world.

Although most Africans are poor, our continent is potentially extremely rich. Our mineral resources, which are being exploited with foreign capital only to enrich foreign investors, range from gold and diamonds to uranium and petroleum. Our forests contain some of the finest woods to be grown anywhere. Our cash crops include cocoa, coffee, rubber, tobacco and cotton.

As for power, which is an important factor in any economic development, Africa contains over 40% of the potential water power of the world, as compared with about 10% in Europe and 13% in North America. Yet so far, less than 1% has been developed. This is one of the reasons why we have in Africa the paradox of poverty amid plenty, and scarcity amid abundance.

Never before have a people had within their grasp so great an opportunity for developing a continent endowed with so much wealth. Individually, the independent states of Africa, some of them potentially rich, others poor, can do little for their people. Together, by mutual help, they can achieve much. But the economic development of the continent must be planned and pursued as a whole.

A loose confederation designed only for economic co-operation would not provide the necessary unity of purpose. Only a strong political union can bring about full and effective development of our natural resources for the benefit of our people.

The political situation in Africa today is heartening and at the same time disturbing. It is heartening to see so many new flags hoisted in place of the old; it is disturbing to see so many countries of varying sizes and at different levels of development, weak and, in some cases, almost helpless. If this terrible state of fragmentation is allowed to continue it may well be disastrous for us all.

There are at present some 28 states in Africa, excluding the Union of South Africa, and those countries not yet free. No less than nine of these states have a population of less than three million. Can we seriously believe that the colonial powers meant these countries to be independent, viable states? The example of South America, which has as much wealth, if not more than North America, and yet remains weak and dependent on outside interests, is one which every African would do well to study.

Critics of African unity often refer to the wide differences in culture, language and ideas in various parts of Africa. This is true, but the essential fact remains that we are all Africans, and have a common interest in the independence of Africa.

The difficulties presented by questions of language, culture and different political systems are not insuperable. If the need for political union is agreed by us all, then the will to create it is born; and where there's a will there's away.

The present leaders of Africa have already shown a remarkable willingness to consult and seek advice among themselves. Africans have, indeed, begun to think continentally. They realise that they have much in common, both in their history, in their present problems and their future hopes.

To suggest that the time is not yet ripe for considering a political union of Africa is to evade the facts and ignore realities in Africa today.

The greatest contribution that Africa can make to the peace of the world is to avoid all the dangers inherent in disunity, by creating a political union which will also by its success, stand as an example to a divided world.

A Union of African states will project more effectively the African personality. It will command respect from a world that has regard only for size and influence. The recent attention paid to African opposition to the French atomic tests in the Sahara, and the ignominious spectacle of the U.N. in the Congo quibbling about constitutional niceties while the Republic was tottering into anarchy, are evidence of the callous disregard of African Independence by the Great Powers.

We have to prove that greatness is not to be measured in stockpiles of atom bombs. I believe strongly and sincerely that with the deep-rooted wisdom and dignity, the innate respect for human lives, the intense humanity that is our heritage, the African race, united under one federal government, will emerge not as just another world bloc to flaunt its wealth and strength, but as a great Power whose greatness is indestructible because it is built not on fear, envy and suspicion, nor won at the expense of others, but founded on hope, trust, friendship and directed to the good of all mankind.

The emergence of such a mighty stabilising force in this strife-worn world should be regarded not as the shadowy dream of a visionary, but as a practical proposition, which the peoples of Africa can, and should, translate into reality.

There is a tide in the affairs of every people when the moment strikes for political action. Such was the moment in the history of the United States of America when the Founding Fathers saw beyond the petty wranglings of the separate states and created a Union.

This is our chance. We must act now. Tomorrow may be too late and the opportunity will have passed and with it the hope of free Africa's survival.