By MrsBabie (self meida writer) | 20 days

Citi FM is undoubtedly one of the leading radio stations in the country, reaching out to the discerning listening community in Ghana and beyond and within its few years of existence, it has created a niche for itself as a socially responsive organization, which has led national discourse and advocacy on key issues such as patronizing local rice, boasting agricultural sector, road safety campaigns, amongst many others. 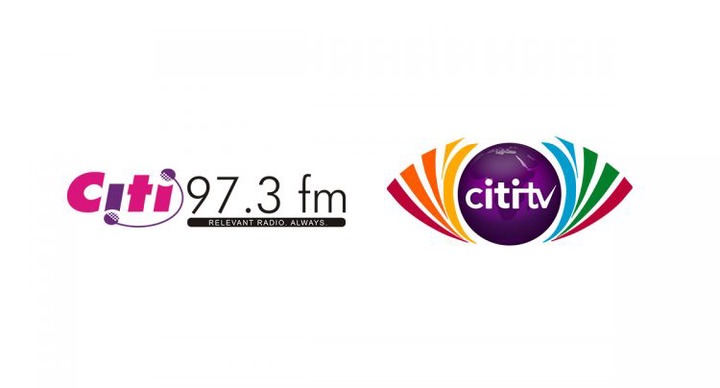 They have been able to achieve these feats, thanks to a brilliant team at the media organization and the inspiring leadership of Bernard Avle, a well respected leader and voice of conscience in the country. Bernard Avle, who was adjudged the 2017 PAV Journalist of the Year at a ceremony organized annually by the Ghana Journalist Association.

Well, these team of brilliant people at Citi FM, amongst its many initiatives, have seen two of them, gaining fast national relevance and maybe sadly, the political systems may have succeeded in somewhat stealing those ideas and campaigns, but from hindsight analysis of how it punned out eventually, one can say that, the government of the day, failed in prosecuting the national agenda, many much desired from same. 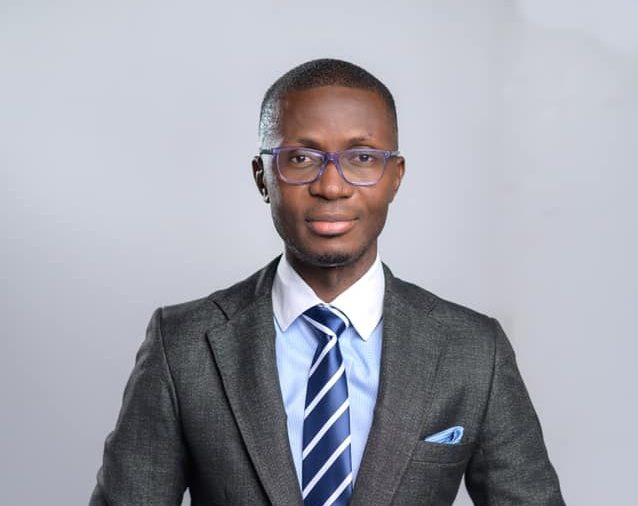 The first initiative that the Citi FM team started and fast caught the nation's attention was the stations head on fight and advocacy with the illegal small scale mining menace, popularly known as Galamsey. Many communities in Ghana have been suffering from the negative effects of galamsey which has left most of Ghana’s fresh water poisonous, with thousands of acres of fertile farmlands also destroyed and although Ghana’s laws are clear on illegal mining, the activity has been allowed to continue for several decades now. Citi FM, which has been at the forefront of media advocacy and crusade for action against the illegal activity, had among other things petitioned parliament to act to stop the illegal activity and despite the NPP government taking over this and creating a national operations, it is still unclear today, four years on, as to what the Nana Addo government’s next line of action is, with regards to completely addressing the problem.

In 2016, Citi FM spearheaded the crusade against illegal small scale mining and at the time, major water bodies in the Western, Ashanti and Eastern regions, as indicative in this news report https://www.youtube.com/watch?v=2tC8SYtyoeQ, that supplied water to over ten million residents in these areas were heavily polluted. The Ankobra, Offin and Birim rivers were the focal points. The Ghana Water Company warned of dire consequences at the time. The Company that treats water and distributes to our homes said if the situation was not addressed by stakeholders, the near future would be calamitous for the country. It warned at the time that Ghana may be resorting to the importation of water in the next two decades if the problem was not addressed. Because of the turbidity of the water bodies mentioned, its production plants had to work extra to purify water for domestic consumption and most of the river bodies were drying up or being polluted beyond redemption. 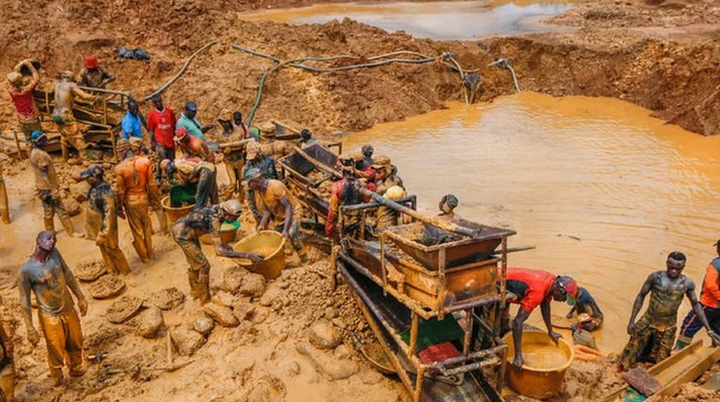 Many hectares of forest reserves in the Ashanti, Western and Eastern regions were fast depleting due to illegal small scale mining activities happening in those reserves, hence Citi FM, through its flagship programme, the Citi Breakfast Show, started the #StopGalamseyNow campaign. The campaign made five clear demands of government: The total cessation of all small and medium scale mining for a period of six months, The cessation of the issuance of new mining licenses for a year, The reclassification of mining categories to reflect the use of new/larger equipment, The allowance of water bodies to regenerate their natural ecology and Tree planting and a land reclamation project

This generated considerable discussion in the country, compelling government to institute some measures and Government eventually placed a ban on all forms of small scale mining in May 2017 and set up the Inter-Ministerial Committee on Illegal Mining (IMCIM). IMCIM was made up of ten ministries including the Lands and Natural Resources, Defence, Interior, Local Government and Rural Development, Regional Re-organization, Chieftaincy and Religious Affairs, Monitoring and Evaluation, Information, Sanitation & Water Resources, and Environment, Science, Technology and Innovation (MESTI) as chair for the committee and a military and police team christened Operation Vanguard was subsequently commissioned by the IMCIM with four operating bases in the Ashanti, Eastern, Western and Central regions. Their mandate was to flush out all illegal miners and enforce the ban on all forms of small scale illegal mining. 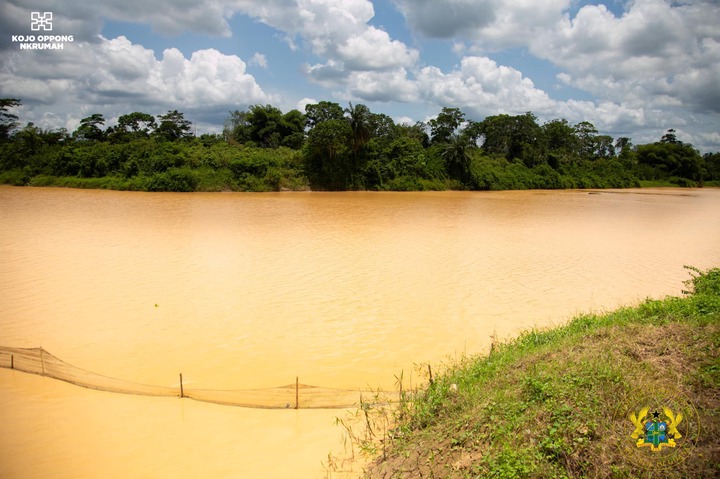 Their mandate was to streamline the activities of Operation Vanguard and the small scale mining licensing regimes. A year after its inauguration in 2018, it vetted and issued licenses to over 600 miners to go back to work. In 2017, the Chief Justice also designated seven (7) High Courts and Seven (7) Circuit Courts located in Accra, Sekondi, Kumasi, Cape Coast, Koforidua, Sunyani and Bolgatanga to deal with all mining offences committed under the Minerals and Mining Act, (Act 703). Indeed, Parliament also amended the Minerals and Mining Act, to prescribe harsher punishments for offenders and mandated State institutions like the Forestry Commission and the Minerals Commission were strengthened to enforce the laws on small scale mining.

Gains were initially made but there major setbacks militating against the Stop Galamsey fight began to rear its head, when the secretary of the Inter-Ministerial Committee on Illegal Mining, Charles Bissue, for instance, was implicated in a documentary allegedly taking a bribe to aid the issuance of mining license He has since stepped down from his role as Secretary to the Committee and has been cleared of the allegations by the Criminal Investigations Department and with other confirmed stories of missing excavators, the entire campaign came crushing months even before the just ended elections and with the Presidents promise of putting his presidency on the line, just to win the fight against galamsey, the NPP's campaign even shyed way from mentioning anything to do with the fight. Today another dialogue has been held and according to the new minister, it will continue to various mining towns and villages and already, analysts believe that, another campaign will be started and it will not end anywhere near bringing a solution because, the challenges in the first filed fight, has not been conclusively death with yet. 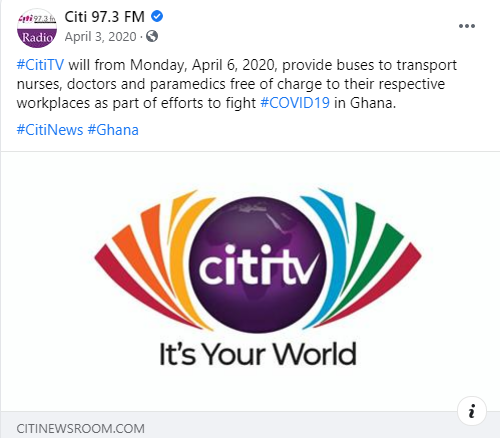 The next and last initiative that the Citi FM team had started was the bussing of health officers, when Ghana was battling the first wave of the Covid-19 virus last year. Earlier in April 2020, management had announced through its social media and Breakfast Show strategic platforms that, "Citi TV, will from Monday, April 6, 2020, provide buses to transport nurses, doctors and paramedics free of charge to their respective workplaces." and this went viral, receiving wide acceptance and applause.

Health workers who were the frontline workers battling the outbreak of the 2019 novel Coronavirus (COVID-19), following the lockdown of the Kumasi and Accra Metropolitan areas and the Kasoa enclave, some health workers who did not have their own vehicles had found it difficult to get transportation to and from work, as the use of commuter vehicles popularly referred to as “trotro” had also been suspended as part of the restrictions, while some health workers, particularly nurses, have also complained about stigmatization from the general public, including some transport operators. It was in this strategic response to these concerns, that, the renowned private media station based in Accra, Citi FM and Citi TV, took the initiative to alleviate the plight of the health workers by hiring the Aayalolo buses to transport health workers for free during the period of lockdown.

The gesture formed part of the station’s contribution towards the national effort in fighting the outbreak of COVID-19 in Ghana and quickly, four (4) buses had been dedicated for the purpose and they were to ply four different routes to cater for most health workers within the capital. 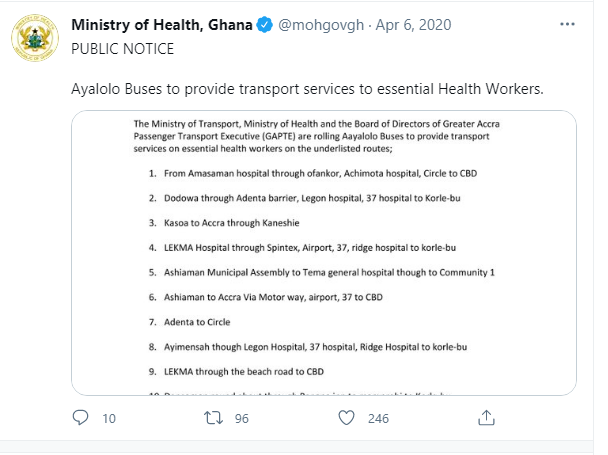 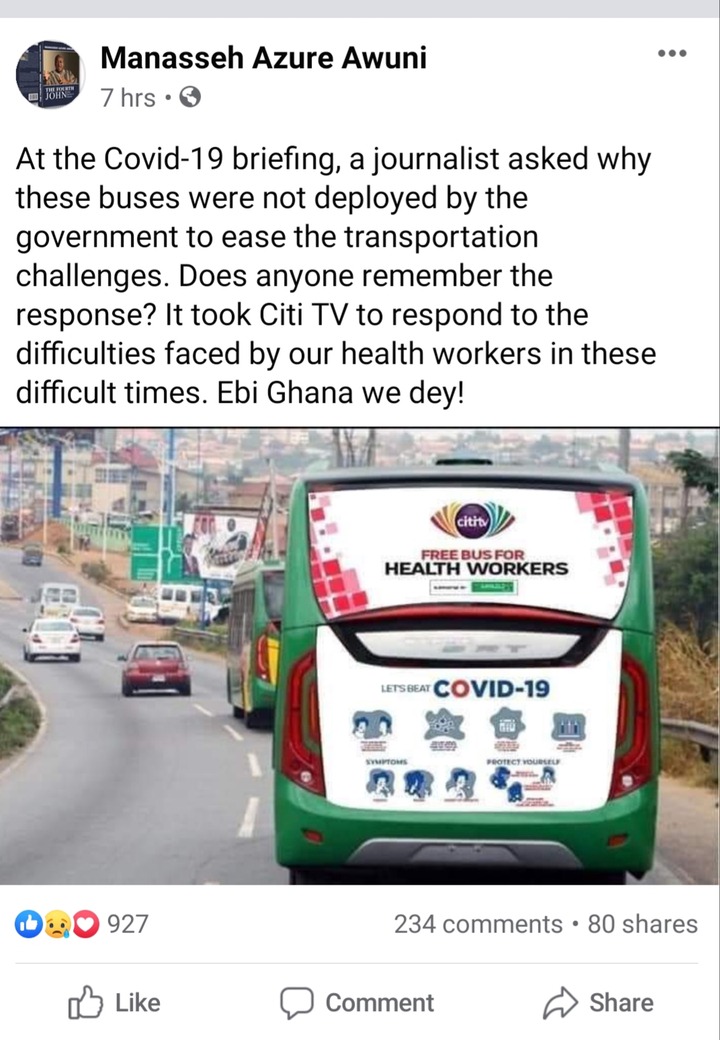 Few hours to this announcement, the Greater Accra Passenger Transport Executive (GAPTE), operators of the Aayalolo Bus Services, quickly withdrew the buses it hired to Citi TV to transport health workers in Accra within the period of the lockdown, as the withdrawal comes barely 12 hours to the commencement of the free bus service, as management of Citi TV received an email from the Depot Manager of GAPTE, Mr. Charles Annan, announcing the withdrawal of the buses allocated to Citi TV.

In the email, Mr. Annan said, “Government has directed us to deploy the Aayalolo buses within the lockdown area in GAMA [Greater Accra Metropolitan Area]. The schedule as provided considers our already agreed routes as advertised by your company,” he said. The Depot managers said the government would pay for services so management would refund the money already paid by Citi TV. “I will deliver the cash to you by close of day today [Sunday, April 5, 2020].” 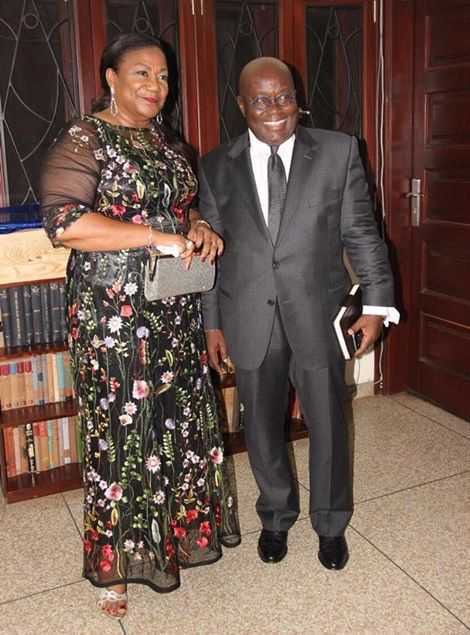 Fast forward quickly, as the President announced his governments intervention, surprisingly, this was one of the few interventions and for observers, many knew where it originated from, not the government but Citi FM's leadership. Fast forward, this initiative collapsed, after it seemed to be a success a month or so, after it was been implemented.

Truly, Bernard Avle, has shown great leadership and has indicated that, he is indeed an asset to this nation and we only pray that, his next initiative is not easily let go and left in the hands of politicians, who join in, as many are incompetent in pursuing an agenda and seeing it institutionalized to contribute greatly towards our national development. 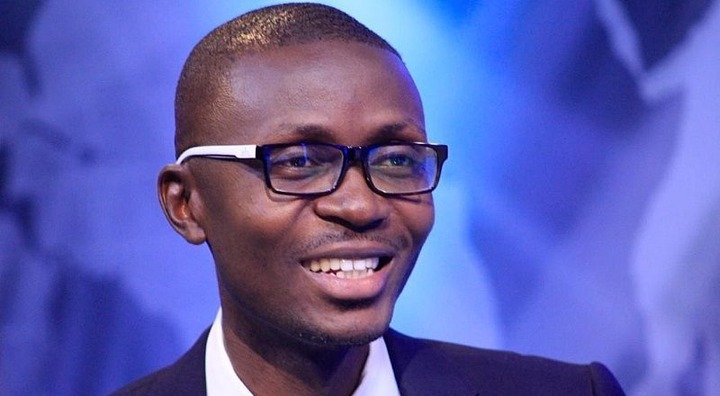