By Tinch (self media writer) | 10 months ago The leadership of the National Democratic Congress (NDC) convened a meeting with the Parliamentary caucus today, and it was admitted by both sides that the March 3 2021 incident was regrettable, unfortunate and contravenes the party's values and principles. The Chairman of the Council of Elders, AIhaji Mahama Iddrisu in part of his statement clarifying the subject of the meeting indicated that it had much to do with earlier discussions they've had concerning the "the approvalI of some Ministers designate."

He stressed that some agreement had been reached to guard against future conflicts between the parliamentary leadership and the party leadership. AIhaji Mahama Iddrisu indicated that their cause is justified, as it seeks to protect the interest of the nation other than a partisan agenda. 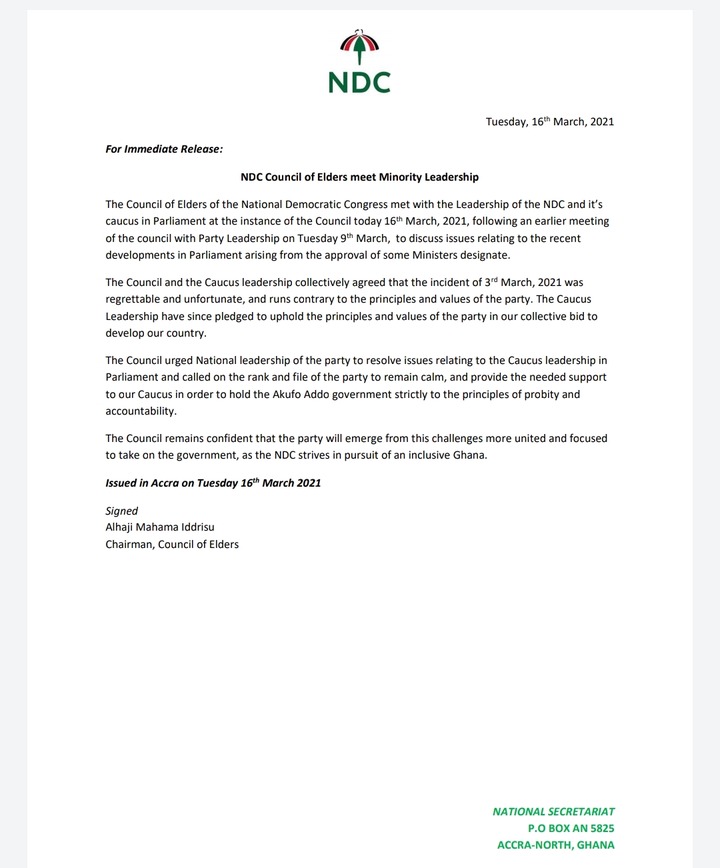 On a more important issue regarding the simmering conflict better the National leadership of the NDC party and the Minority leadership in parliament, AIhaji Mahama Iddrisu intimated that it would be right for peace to be restored. He mentioned that all other issues relating to the misunderstanding that ensued between both leadership must be resolved urgently, such that they could have a united front to hold the Akufo Addo government accountable.

"The Council urged National leadership of the party to resolve issues relating to the Caucus leadership in Parliament and called on the rank and file of the party to remain calm, and provide the needed support to our Caucus in order to hoId the A Akufo Addo government strictly to the principles of probity and accountability."

In light of this, the leadership of the NDC in parliament is expected to issue a statement to clarify issues, especially the resolutions they had taken following a recent attack on them by the National Communications Officer, Sammy Gyamfi.