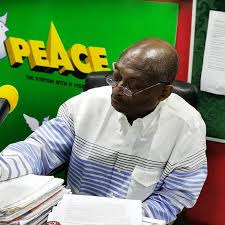 The Editor in chief for new crusading guide news paper, Abdul Malik Kwaku Baako Jnr has revealed that the late sir John is a very good man and have forgiving heart when he did something bad against him, and the New Patriotic Party which hurt them a lot but Sir John find ways in his heart to forgive him and he will never forget it in his life.

Kwaku Baako Jnr speaking on Metro TV good morning Ghana show today, Thursday, 3rd June, 2021 said that he had good relationship with the late NPP general secretary and he was a good man to celebrate in the country.

According to Kwaku Baako Jnr, he hurt sir John and NPP in some instances in which it supposed not to be but when he realized that he made a mistake, and approached Sir John, he forgive him and strengthen his relationship with him more than ever expected.

Kwaku Baako Jnr said when NPP party was holding one of their party primaries, he endorsed Kwabena Agyapong against Sir John and the endorsement hurt Sir John a lot but after everything, he went and told him that he should find ways in his heart and forgive him and he did.

Kwaku Baako Jnr further stated that in another instance, when former President John Agyekum Kuffour wanted to attend the inauguration of former President John Dramani Mahama into office, NPP wanted to block him and he made counter argument about it which hurt NPP but when sir John informed him about it, he asked for forgiveness and he quickly forgive him although what he said hurt the NPP Party a lot then.

He however stated that sir John is a great personality and he had good friendship with him and said he should rest well as Ghanaians and his party folks are mourning him.