The Trades Minister, Alan Kwadwo Kyeremanteng is not taking likely allegations made by a former member and secretary to the Komenda Sugar Factory Project Management Board, Mr Ransford Chatman Vanni-Amoah, that he had sold out parcels of land meant for the factory to private developers. The Ministry of Trade and Industry, through its Chief Director has subsequently issued a press statement demanding an immediate apology and retraction from Mr Chatman Vanni- Amoah for making these scandalous allegations against the Minister.

New publication site, GhanaWeb is equally held responsible to the spreading of these unfounded allegations. No threat of a legal action or sanction was pronounced in a press statement that was issued tot his effect.

According to the statement, the former board member has accused Mr. Alan Kyeremanteng of selling a total of one hundred and twenty-five (125) acres of land that were secured for the cultivation of hybrid sugarcane to feed the Komenda Factory, to alcohol distillers. This allegation went viral just after President Nana Addo Dankwa Akufo-Addo retired from his Central Region tour. 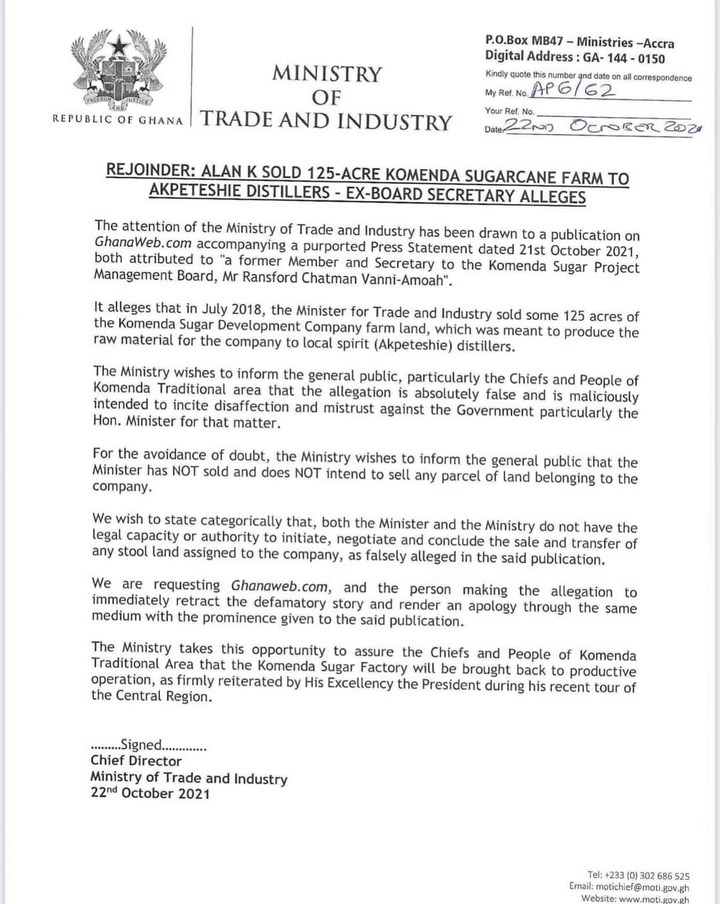 In a response to these claims, the Ministry said the Minister has no right to titles of the land let alone sell out such property to alcohol distillers. It was clarified that the land in contention is vested in the chiefs of Komenda.

"The Ministry and Minister do not have the capacity or authority to initiate, negotiate and conclude the sale and transfer of any stool land assigned to the company," a section of the statement emphasized.

In light of which, Mr. Ransford Chatman Vanni-Amoah is being charged to use the same medium to apologize and retract such false and malicious statement that he spewed in public and in the media.

The Ministry in the ongoing controversy about the operationalization of the factory assured of its commitment and that of government to have the expectations of the chiefs and people of Komenda materialize. It would be recalled that a recent news publication about the state of the factory revealed a rather detoriating state of soem sections of the rehabilitated factory.