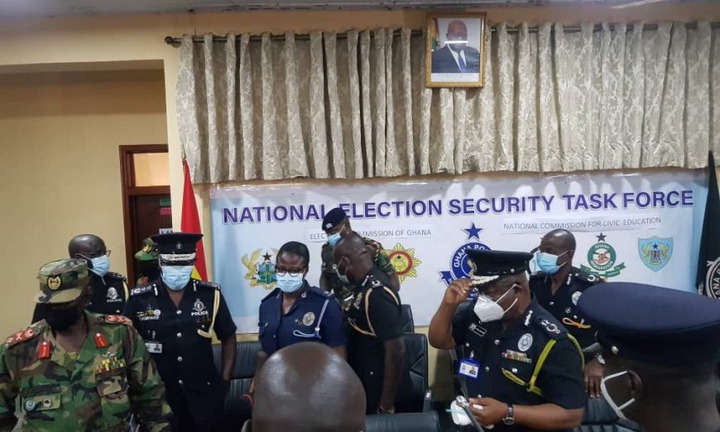 The Inspector General of Police (IGP) and Chairman of the National Election Security Taskforce, Mr. James Oppong-Boanuh, has sent a word of caution to individual and group of persons who might think of causing violence in the coming 2020 general to think twice because, the security are ready to deal with such recasitrants.

“Any person or group who plan to cause trouble or disturbances in any part of the country should think twice about it because they would be arrested and prosecuted”.

IGP made this pronouncement at a press conference to address the nation on security for successful election 2020.

He urge journalists, bloggers and media commentators to fact check what they say or write before sharing saying, intemperate, provocative, insulting language in media space, violate the laws of the country.

Mr. Boanuh disclosed that, global lenses would be focused on Ghana to evaluate the potency of Ghana’s democratic gains in the coming 2020 general elections, and pledged the unwavering commitment of the Police and Security Services to make Ghana a country of peace.

“We are working tirelessly to ensure that the forthcoming elections are conducted in a peaceful atmosphere. All polling stations Will be policed as potential flash points. They will be policed by uniform personnel in regular uniforms.

The support of the Ghana Armed Forces will be in the form of patrol and response to curtail incidents of crime, including violence, vigilantism and terrorism that could spring up before, during or after the elections”.

IGP further added that, on the election day and the period before declaration of results by the Electoral Commission, the security would operate centers call, Joint Operation Centres (JOCs) at the national, regional and district levels.

He hinted that, the security have already have talks with high ranking officers of all political parties and discussions on measures to improve security in ensuring successful elections in December likewise, meeting with the traditional leaders and have appealed to them to help advise residents of their traditional areas, the youth in particular, to stay away from violence and be law abiding.

“We are approaching all Polling Stations as potential flash points. However, we have identified six thousand one hundred and seventy-eight (6,178) flashpoints nationwide”.

The Taskforce have since increased the momentum for their planning, stayed focused and executing activities geared towards providing the needed security in the country.