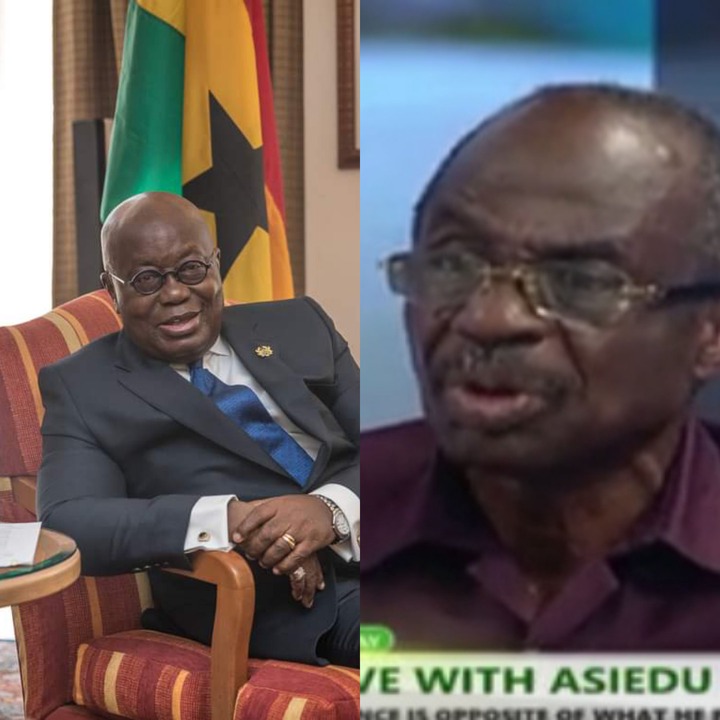 In a hot exclusive interview with Johnny Hughes on TV3's popular morning program, New Day, the General Secretary of the main opposition party in Ghana, the National Democratic Congress (NDC), Hon. Johnson Asiedu Nketia, revealed that President Nana Addo Dankwa Akufo-Addo has scammed some, if not all Ghanaians who trusted him.

Speaking on the live set with a calm voice which indicates emphasis, General Mosquito as he is affectionately called, pinpointed some character traits of President Nana Akufo-Addo before he was given the mantle to govern the country, and the actual kind of governance we see him display today, which he said are in sharp contrast.

He said that he is feels that President Akufo-Addo has 'scammed' most Ghanaians and that includes even himself to a certain degree. This is because he believed that this was a man who has spent all his life advocating for free and unbiased democratic tenets to be upheld by all. He was someone he has always looked forward to in terms of democracy when he was younger.

"President Akufo-Addo's governance is compelling me to have a rethink about the entire situation we find ourselves in. Look at what happened at Ayawaso Wuogon, the Techiman South incident, the Ejura shooting incident; all these make me believe that the President has scammed most of you. Of course, you are not part because I've been following you a lot. But I mean some Ghanaians, including myself to a large extent," Hon. Asiedu Nketia told Johnny Hughes.

The host of the program, Johnny Hughes said that he [Asiedu Nketia] is someone who has been in government before and so he would like to know what he would tell the president if he meets him.

He answered and said, "Oh I have met him on some occasions especially funerals and other public gatherings. One time I met him, and he told me frankly that he is not happy with the way I speak about him on television sometimes. And I replied him that I do so because he is not doing what is expected of him as the human right advocate we know him to be. And the two of us just laughed together and then we parted ways."

"Look, the Committee that was established to probe the Ejura shooting incident was just something to cover up their undemocratic conduct and then quickly dissolved. The person who heeded that committee was my own lecturer and I was really disappointed at him," he added.

5 Ways Your Phone Could Land You in Jail