By Newbyt.com (self media writer) | 4 months ago 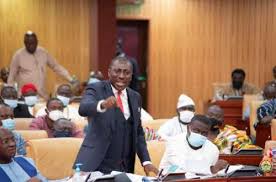 Alexander Afenyo-Markin, the Deputy Majority Leader, has encouraged the Minority in Parliament to support the passage of the Electronic Transaction Levy (E-levy) to ensure that government has the resources it needs to conduct the country's business, particularly the evacuation of Ghanaians stranded in Ukraine.

The conflict between Ukraine and Russia, according to Mr. Afenyo-Markin, is hurting emerging countries, including Ghana.

“If you’re talking about the E-levy, that’s what I was going to say next.” Because we are not in standard times, we should gather around it and find a way to generate cash as a country to salvage the situation.”

“If you’re talking about the E-levy, that’s what I was going to say next.” Because we are not in standard times, we should gather around it and find a way to generate cash as a country to salvage the situation.”

After the Minority Leader, Haruna Iddrisu, used Order 72 of the Standing Orders to address an issue of urgent public significance, the Effutu MP made the remarks.

“We know how many Ghanaians are studying in Ukraine.” Quite a few are studying medicine, and some are likely to be supported by Members of Parliament. Ukraine’s condition is quite concerning. Given the situation in Ukraine, which is on the verge of becoming a heated war, and Russia’s refusal to surrender to Western diplomatic maneuvering, particularly that headed by French President Macron and many others.”

The MP for Tamale South asked that this show pupils and their parents support Ghanaians.

Mr. Afenyo-Markin agreed with the Minority Leader's argument, saying, "Considering what is occurring in Ukraine, we must care about our countrymen."

According to him, the government is keeping an eye on the situation and would take the necessary steps to safeguard the safety of Ghanaians, particularly students.

However, the Deputy Majority Leader has urged Members of Parliament to put partisan politics aside to cope with the current situation.

“Now is the moment for us as a country to take a fresh look at our politics…. Partisan politics are not appropriate at this time. This is the time to work together since there is a larger issue that will affect not just the residents of Effutu but also those in Ensemble. As patrons, we are being challenged to think of new approaches.”

“I have my point of view on this, which I feel members will support.” That when one person coughs, another person sitting nearby gets a cold.”

Meanwhile, following reports of tensions and violent clashes, the government has expressed severe worry for the security and safety of Ghanaians living in Ukraine through the Ministry of Foreign Affairs.

In the interim, the government has asked over 1,000 students and other Ghanaians to seek help at government-run shelters, according to the Ministry.

This is temporary protection until the government “engages the authorities, our relevant diplomatic posts, and our honorary consul on additional actions.”

Additionally, Ghanaian students in Ukraine are pleading with the government to consider relocating them from the Ukraine-Russia zone as soon as possible.

One of them, Joseph, a medical student, told JoyNews on Thursday that the recent events have made international students in the region fearful.

He stated that they must rely on their Ukrainian counterparts for updates on the situation.

“Right now, I’ve got two bottles of water and four crackers, which I got this morning.” When I arrived at the store, it was crowded, and there were just a few bottles of water available. I wanted to buy bread, but they [customers] had already purchased all of the bread in the shop; I was startled,” he said on the Super Morning Show.

The ongoing fighting in the Donbas between separatists backed by Russia and the Ukrainian army appears to be the source of friction between Russia and Ukraine.

“Shortly after Russia annexed Crimea from Ukraine in 2014, pro-Russian separatists declared two republics in the country’s east: the Donetsk People’s Republic and the Luhansk People’s Republic — much to the chagrin of the Ukrainian government,” according to CNBC.

“Since then, there have been continual clashes and fighting between Ukrainian army and separatists in the region known as the Donbas.”

“The “Minsk agreements” resulted from Germany and France attempting to negotiate peace between Russia and Ukraine. Although there have been periods of cease-fire in the Donbas, both Ukraine and Russia have accused each other of breaking the terms of the agreements, and combat has resumed.”

Russian military launched their predicted onslaught on Ukraine on Thursday, according to world media reports, as President Vladimir Putin defied international criticism and sanctions, warning other countries that any attempt to interfere would result in “consequences you have never seen.”

“World leaders criticized the commencement of an invasion that might cause large casualties, topple Ukraine’s democratically elected government, and jeopardize the continent’s post-Cold War equilibrium as big explosions were heard before daybreak in Kyiv, Kharkiv, and Odesa.”

But, in a televised address, Putin justified the attack, claiming that it was necessary to protect people in eastern Ukraine.

He stated that Russia does not seek to occupy Ukraine but instead “demilitarize” the country and bring criminals to justice.

Content created and supplied by: Newbyt.com (via Opera News )