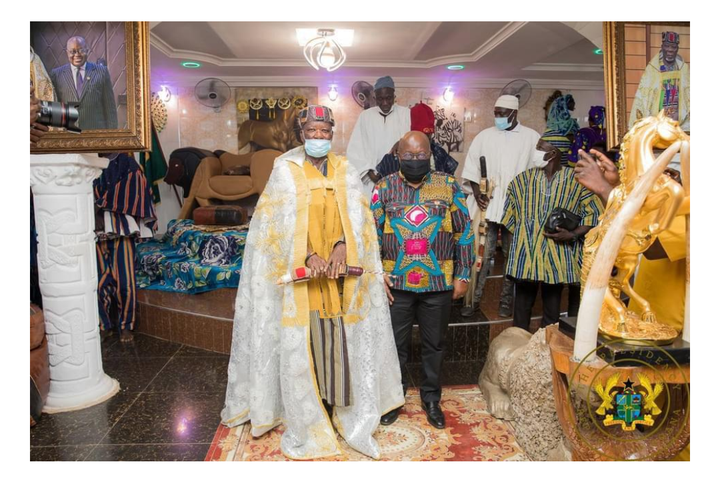 The Paramount chief of the Buipe Traditional Area in the central Gonja District of the Savannah Region, Abdulai Jinapor ll, says the people of Savannah Region cannot thank President Akufo-Addo enough for making their dreams of having a Region a reality.

Addressing hundreds of people to welcome President Akufo Addo on Sunday 11, 2021, at his palace, in a speech read on his behalf by chief AR Adam, the paramount chief expressed delight and gratitude to the President for fulfilling that dream, as well as bringing numerous development in the area.

“Your Excellency, it is my singular honour to, on behalf of the traditional authority of Buipe, express our thanks and gratitude for the numerous development projects that the area is benefitting from, principal among them is the creation of of the Savannah Region,” said the Buipewura.

“Others include Yapei water town supply, ongoing Green Ghana project and the emergency accident hospital in Buipe among others”.

While thanking the Akufo-Addo government for its commitment to the area, the Paramount Chief also lamented the poor state of facilities in other areas within the area.

He appealed to the Akufo-Addo governemnt to give them more development, especially the construction of more roads for some deprived communities in the area and consider spiliting the District into two constituencies and districts which he said by land scape, is the largest in the Region in order to bring development closer to the people.

The chief also appealed to the President to consider revamping the Shea nut processing factory to create job opportunities for the teeming youth in the area.

He again mentioned that, though the limestone deposit in the area is use to process into cement, there are still other unban mineral deposits which could be processed into paint and glass among others.

The chief added that, through the River Volta at Yapei in the District, irrigation system should be adopted to ensure an all year round farming in the area and hence appealed to the president to consider adopting such irrigation practices.

In his address, President Akufo Addo assured the Buipewura and his people of government’s commitment to evenly spread development to all parts of the country, including the Buipe Traditional Area.

Reacting to the concerns raised by the Chief, President Akufo said, the creation of constituencies does not lie within his power but would however informed the Electoral Commission about the chief’s plea.

He however, expressed appreciation to the people of Savannah Region for believing in his policies and increasing the support for his party as he said the NPP moved from one seat to three seats in the 2020 general elections.

The President later commissioned an 85-bed emergency, accident District Hospital, to serve the people in Buipe and the Region at large.

The hospital, whose construction commenced in 2018, is one of six medical installations for which the Government secured an 80-million-Euro facility from Raiffeisen Bank of Austria.

The President is on a two- day working visit in the Savannah Region which commenced on 11th July, 2021.

On the second day of his working tour, Mr Akufo-Addo will inspect water and road projects at Kpembe and Salaga.

In Salaga, the president will also open AstroTurf and then proceed to inspect the ongoing Bunjai-Fufso road project.

Nana Akufo-Addo will leave the Savannah Region for Tamale, the capital of the Northern Region on Tuesday.