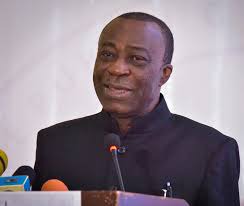 A leading member of the New Patriotic Party (NPP), Mr Osei Akoto, has Fumed at his own party stating boldly that the NPP should forget about breaking the eight (8) because they will definitely go to opposition.

According to the leaked Audio, Mr Okoto Osei noted that the country has been highly mismanaged by his own Party the NPP but he can only blame the current Finance Minister, Ken Ofori-Atta and the leader of the Economic Management Team Dr Mahamudu Bawumia for the woes of the country.

He noted that Ken Ofori-Atta is the worse Finance Minister the country has ever had.

Dr Okoto stressed that the NPP should not deceived themselves because from a just point of view, things are not well in the country. He again established that they party ran thier mouth that they have the men but there is nothing to show from them. He noted that about 70% of the men the NPP claims they have are inept. He used the word 'bullshit.'

The NPP administration has been highly criticized for assuring Ghanaians that they have the men yet the country is moving from bad to worse.

Anthony Akoto Osei is a Ghanaian banker and politician. Osei was in the cabinet of President John Agyekum Kufuor as Minister of State for Finance and Economic Planning. He was a member of Parliament for the electoral district of Old Tafo in the Ashanti region.

Prophet Kumchacha Reveals To Ghanaians Why He Walks With Body Guards