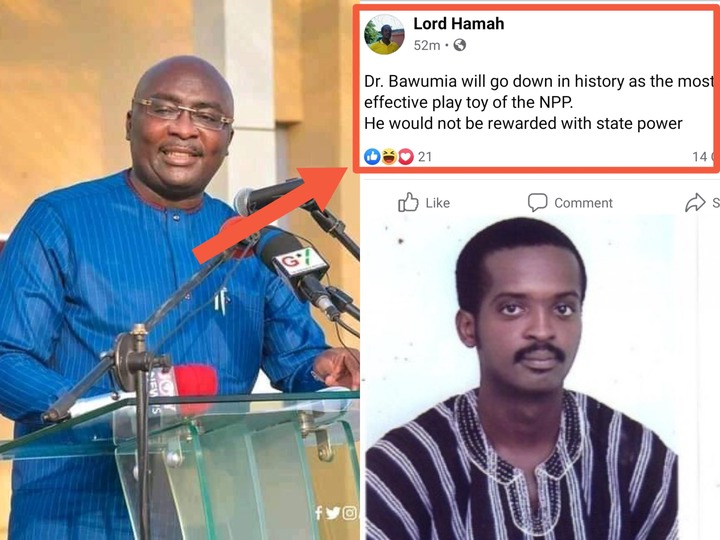 Consider it to be a fair remark by the former Propaganda Secretary of the opposition National Democratic Congress, Lord Hamah, about Vice President Dr Mahamudu Bawumia's chances contesting for the presidential ticket of the governing New Patriotic Party (NPP). It is not clear what might have provoked this young politician to argue that Dr. Bawumia cannot win the contest.

In a Facebook post, Lord Hamah stressed that the Vice President would become a subject of political mockery within the NPP in respect of the coming primaries. He indicated that the party does not consider him worthy of leading them into an election.

In his view, Dr Bawumia will be bamboozled into the cpresidrntial contest against the person whom the party bigwigs had already settled form. He said; "D. Bawumia will go down in history as the most effective play toy of the NPP. He would not be rewarded with state power." 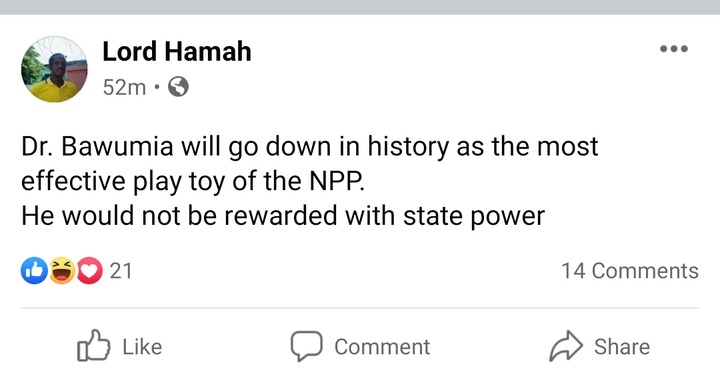 This may sound to be an unpalatable remark from no other person as a member of an opposition party. The supporters of Dr. Bawumia would not spare him for making this comment, as it thus incite division in the ruling party.

But would you blame him for expressing his opinion on a matter as tense as the coming internal elections of the NPP? Already from the quarters of the NPP, it has been established that the party rewards people based on their stewardship, and largely on seniority. Just as Alan Kyeremanteng was shot off in a contest with Nana Addo Dankwa Akufo-Addo, the Vice President may suffer the same fate.

To some political analyst, Alan Kyeremanteng's time to contest on the ticket of the NPP matures with President Nana Addo Dankwa Akufo-Addo's retirement from the Presidency in 2024. However the party internal election will kickoff in 2023 after a polling station, Constituency and regional executive elections.

Over the past week, the two personalities; Alan Kyeremanteng and Dr. Bawumia were fed with some intriguing birthday remarks which excited some conversation of what could become of the campaign when the party finally gives the green light. Before then, how valid is Lord Hamah's claim?

Let me have your opinion below.