The Majority caucus in Parliament has denied the claim that the withdrawal of four security Personnels attached to Alban Bagbin, the Speaker of Parliament, was politically motivated.

According to the Majority Caucus, Alban Bagbin has benefited the most from the security than his predecessors.

They also noted that they saw no problem with the high military trying to regularise the irregularities in the military security details since the due procedures were not followed in attaching them.

“In the event, if the military insists on regularising his security detail, how does that compromise the Speaker’s security, or put him in harm’s way as the Speaker himself has stated?”. 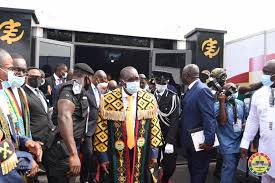 They further added that speakers are supposed to be neutral umpires or referees in Parliament. They are supposed to listen to Members in silence and not participate in debates and make rulings when called upon to do so by Members.

They, therefore, called upon the minority to prove that the withdrawal of the security Personnels was politically motivated otherwise they see it as sheer propaganda, not the truth.

Two notorious MoMo fraudsters arrested at Kasoa while others ran away

Enough Is Enough: We Have Been Silent But That Does Not Mean We Have Forgotten

Government is not creative to hide their criminalities - Black Rasta