The Majority in Parliament have signalled the Speaker of Parliament Alban Bagbin over their intentions to fight him for rejecting the 2022 Budget Statement and Economic Policy. The Chief Whip for the Majority, Frank Annoh-Dompreh argues that the Speaker by his actions last Friday insulted the supremacy of the 1992 Constitution by putting a question to parliament for the rejection of the Budget.

He exclaimed that the Speaker intended to ‘kill’ the 2022 Budget Statement and Economic Policy by frustrating considerations that were advanced by the Majority that unfortunate day. He noted that the Majority would not allow such intentions from the Speaker to have their way in Parliamentary work.

“You abused and insulted the constitution of the Republic. It would be in your dream to think that this would be allowed to stand. We will kill your killer intentions by teaching you the law. The law is supreme!” he stated. 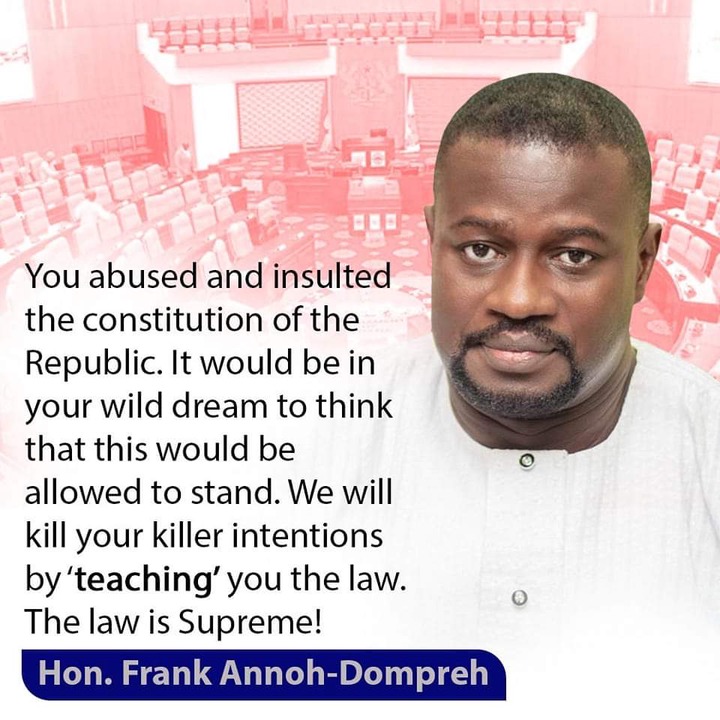 This adds to a series of backlash the Majority in Parliament have hauled at the Speaker for allowing the Minority to proceed to take a vote against the budget, contrary to Article 104 of the Constitution and Order 109 of the Standing orders of Parliament. Among some caucuses of the ruling New Patriotic Party (NPP), the budget was in principle not rejected as the Minority had portrayed.

The controversy about the legality of the decision has heightened debate in the media space, especially with the interpretation of the two interconnected provisions; thus Order 109 and article 109. The next parliamentary sitting on Tuesday will have the deputy speakers of parliament leading proceedings. In that context, the Majority wouldn’t risk raising an agenda to challenge the Speaker until he returns from the medical trip.