By Mavis-Love (self meida writer) | 7 days 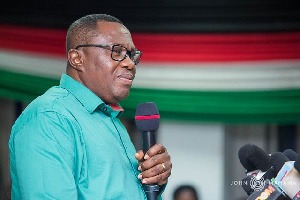 The National party chairman for the National Democratic Congress (NDC), Chairman Samuel Ofusu Ampofo has stated that he will describe Akufo-Addo's 100 days in office as "disastrous".

Mr. Ofusu Ampofo speaking to the media today from Tamale in the northern region stated that the New Patriotic Party Government led by President, Nana Addo Dankwa Akufo-Addo has totally shocked and surprises him for he never thought Ghana will be like this under President Nana Akufo-Addo and NPP.

According to chairman Ofusu Ampofo, when he saw Ghanaians living in a difficult situation at this time, he was surprised because of how President, Nana Akufo-Addo accuses former President, John Dramani Mahama and NDC for messing up the economy when assumed power and he thought in Akufo-Addo's second term in office, things will totally change but he couldn't see it that way.

He stated that if he saw the current power outages (dumsor) in the country and how the government is solving the situation at hand, he could say that Ghana will face a lot of difficulties in the coming weeks if nothing different is done about it.

Chairman Ofusu Ampofo who stated that Nana Akufo-Addo's 100 days in office is "disastrous" said if he saw Ghanaians fetching water from the gutters in some parts of the country, it tells him that the government is not managing the economy well as they promised the good people of Ghana.

According to him, the power outages in the country is clear "mismanagement" problem but not generational problem.

He told the government in his speech that the NDC have the expertise who solved the power outages issues in the country when former, President John Dramani Mahama was facing the same crisis.

He stated that the government can call on them to help them solve the situation for the country in the energy sector.

Chairman Samuel Ofusu Ampofo further stated that "reckless management" of the government has made price of goods and services in the country to go up.

He stated that fuel prices is increasing, a bag of cement is no more Ghc34 cedis but Ghc50 and consumable goods prices has gone up rapidly which the good people of Ghana could not expect this from the NPP government.

He finally said that he will rate Akufo-Addo's 100 days in office as "disastrous" because of how Ghana is facing a lot of challenges under him, and told the government to solve the challenges currently facing Ghana if not things will worsen for the country in the coming days.

Meanwhile some people in the country are praising the government for performing better because of how the covid-19 pandemic has destroyed majority of countries economy but they're putting measures in place to help the country.