Mr Speaker, The Comparison Is Like Chalk And Cheese- Jinapor Fires Minority 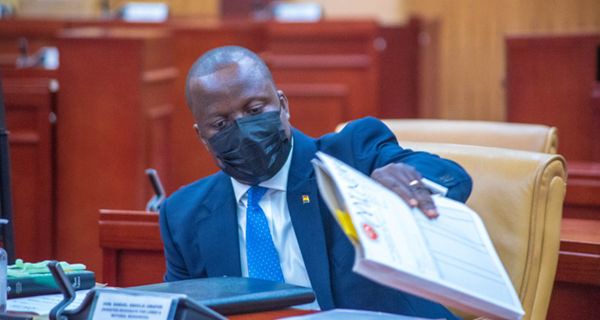 Minister for Land and Natural Resources, Samuel Abdulai Jinapor has argued that a comparison by the minority in parliament of the 2021 Budget and Economic Policy under President Akufo Addo is reassuring than any other administration, given the circumstances the current finds itself in. He emphasized that the performance of President Akufo Addo in his first term amid the stressors of COVID-19, and the interventions offered Ghanaians is incomparable to any in the country's democratic life.

Hon. Jinapor told the House of Parliament that an attempt by the Minority to declare the significance and rather promising intervention by the Akufo Addo government, at a time when there is global meltdown, is flawed. He stressed that the economy has been more resilient in the face of these situations unlike the predecessor, John Dramani Mahama which caused the nation into an IMF bailout.

He likened the comparison the Minority seek to draw as 'chalk and cheese', stressing the unmatched development the nation had witnessed over the past five years.

"Five years ago may be a bit long ago but it's no so long. The verdict is clear, the economy of today which in spite of COVID was able to pay for free electricity, free water, which is able to provide food, and the economy which was resilient in spite of COVID, and that economy which was under IMF….Mr. Speaker, the comparison is like chalk and cheese. It's like day and night."

Hon. Jinapor indicated that the John Mahama administration in 2016 had the Finance Minister, Seth Tekper report a rather underperformance of the various sectors of the Ghanaian economy. He noted that Agriculture recorded a growth of 0.04 percent, industry at 4.3 percent , and mining at -0.2 percent in 2016, but under President Akufo-Addo there has been marked improvement than ever imagined.

Hon. Jinapor on this background argued that the obvious as confirmed by the Ministry of Finance, and the Statistical Service, is that the President had outperformed any other even in the face of challenges imposed by COVID-19, and the associated impact.

"Mr. Speaker where is the comparison? Which is why a careful examination of this budget and all the previous budget reported by various finance ministers and Ghana Statistical Service in almost all sectors of our national life, the comparison is that we doing far better than President Nana Addo Dankwa Akufo-Addo's first term than ever done."