Reasons Rt. Honourable Speaker of Ghana's Parliament is a Member of the House

By NewsBox (self media writer) | 6 days ago 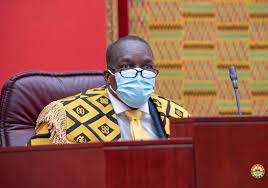 As parliament is receiving memoranda on the current bill to proscribe LGBTQI+, sponsored by some eight committed members of parliament, it has received several comments the world over. One of such important comments is that of the Speaker of Parliament of Ghana, Rt. Hon. A. K. S. Bagbin, when he openly declared his resolve to ensure the bill is passed to protect what it describes as proper human values in Ghana.

The comments of the honourable speaker has generated a lot of controversy including among members of parliament. For example, the majority leader, Hon. Osei Kyei Mensah Bonsu, who has sent a clear message to the speaker asking him not to dictate to parliament what laws to pass because he, the speaker, is after all, in his words 'not a member of parliament'.

In addition to the above, Article 101 of the constitution states that the Speaker shall preside over all sittings of parliament and in his absence, the deputy speaker. Again, Order 8 of the Standing Orders of Parliament provides for the Order of Precedence in parliament and the Speaker comes first before any other person holding a position in parliament. These frameworks concludes that no individual can say the speaker is not a member of the house. In fact, the speaker can be described as the number three most important person in Ghana, the Gatekeeper and the Leader of the Legislative Arm of Government in Ghana and he must do well to protect, defend and preserve the constitution of Ghana at all times in his/her capacity as a Speaker.

Not withstanding all these, Order 21 of the Standing Orders of Parliament states that 'there shall be freedom of speech, debate and proceedings in parliament and that freedom shall not be impeached or questioned in court or place out of parliament.

Based on these, it must be made known that the Speaker of Ghana's Parliament is first, a member of the house and second, have the right to comment on any matter as he deems fit by ensuring good laws are passed for the people of Ghana. Also the laws of Ghana permits the Speaker to use his/her discretion to take decisions on certain matters. Powers which, it is the Speaker alone who can exercise. The only thing he is not permitted do as a speaker in the house is to take part in actual voting.

Some things women do that scare men away