The United Kingdom and the European Countries are seen by a lot of people all over the world as one of the highest decision making countries in the world. Their influence over the rest of the world is unmatched. Whenever they take a decision, it is assumed to be the best, and only few individuals in authority do speak against their decisions.

The president of the Republic of Ghana has delivered a bold speech to the United Kingdom and other European Countries as he was given the platform to deliver his message at the United Nations General Assembly.

Many Ghanaians have expressed their heartfelt gratitude in praise of the president of the Republic of Ghana, as they glorify him as the one raising high the image of Ghana before the international entities.

The president of the Republic of Ghana was reported to have admonished the leaders of the European Union and the United Kingdom to accept the vaccination given to Africans as valid, and should not term fully vaccinated Africans as unvaccinated as they have planned to do.

The speech was one in a million, given the fact that no one could think that the president could make such an appeal to cajole the leaders to reverse their decision.

Ghanaians and some media stations have reacted to the story in praise of the president of the Republic of Ghana, Nana Addo Dankwa Akuffo Addo. Redeemer has expressed in his reaction that this act of Nana Addo has evoked the memories of Kofi Annan as he raises the image of Ghana higher. 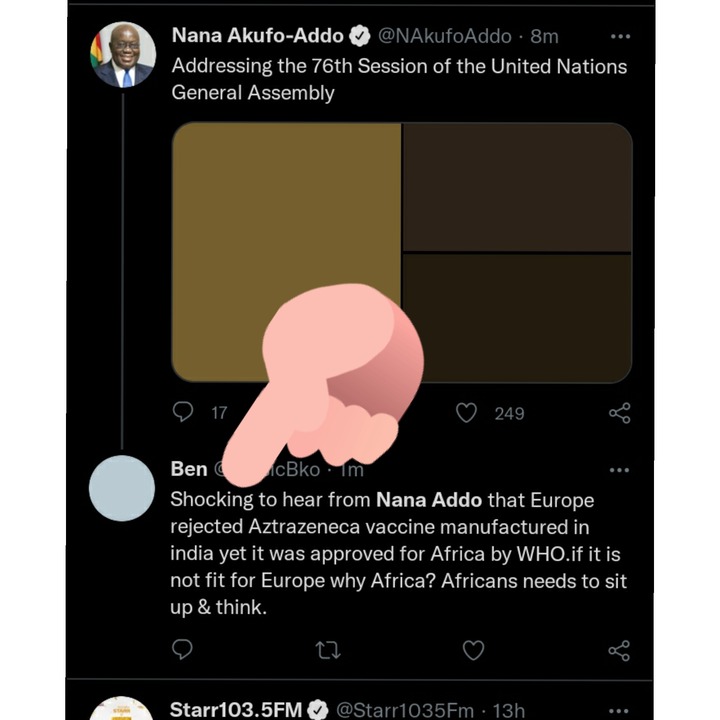 According to Ben, he would not have been aware if Nana Addo were not to mention the fact that the European Union and the United Kingdom did not validate the vaccines administered in Africa. Ommcom News picked up the story and has alleged that Nana Addo has slammed the European Union and the United Kingdom for their step. Kay and a twitter user called Nana Addo has praised the president for his speech.

Do you think that Nana Addo's speech would convince the European Union and the United Kingdom leaders?