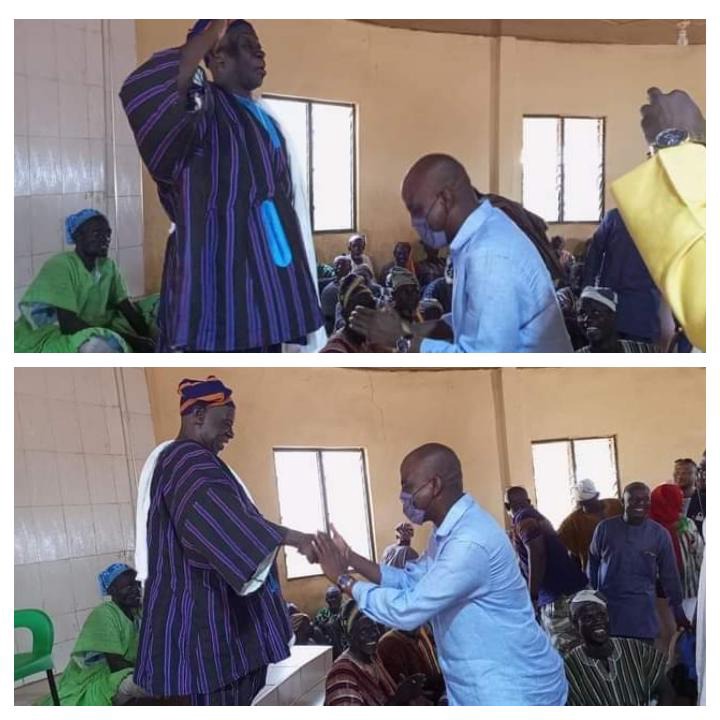 Over the weekend, the Minority Leader, Haruna Iddrisu was in the Tolon Constituency to grace some social functions and as part of his visit paid courtesy call on the chief of Tolon, Naa Major(Rtd) Abubakari Sulemana at his Palace. The visit of the Minority Leader was to partake in the burial rites of the late sister of the Chief who also was the mother of Hon. Abdul Razak, a former NDC MP for the Tolon area.

As the minority leader and his delegation settle in the big round hall of the Palace, the Chief, a veteran senior military officer who is known for his avowed principles beckons the Tamale South MP to receive the traditional kola usually giving to visitors to signal welcome.

To the amusement of everybody in the hall, as Hon. Haruna approaches the Chief, he rose from his makeshift throne and with chest out and stern face, he offered the highest form of salute a military officer will give at the sight of his superior. But the courteous minority leader knelt before the charismatic chief as custom demanded and they exchange some pleasantries before he took the kola and returned to his sit.

Naa Major Retired Sulemana Abubakari has ruled the Tolon traditional area for nearly two decades both as a Regent and now as substantive Chief. He once served as National Security Coordinator under the Kuffuor administration and is credited for birthing National Youth Employment Programme which he championed at his time to cater for rising youth unemployment rates, something he viewed then as a security threat. He and the Minority Leader, Haruna Iddrisu, have very cordial and father and son relationship.