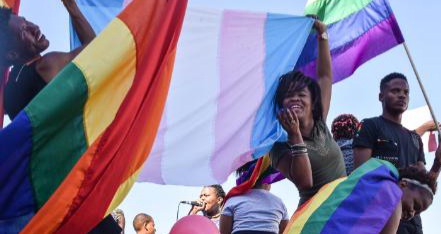 As tensions rise over the debate on LGBT, Parliament is getting ready to discuss one of her biggest debates ever. Parliament will resume in 2 weeks and is set to have a second hearing of the debate. Voting on the debate is also set to happen during the second hearing. Despite the overwhelming support for the bill, there is an also a small faction that is opposed to the bill. They argue that the bill will infringe on the rights of other people.

It can be recalled that in a recent interview, Osei Kyei Mensah, the Majority Caucus leader confirmed that some MPs have been denied of visas to other countries. This is not surprising because these foreign countries have turned themselves into bullies who want everything they want to be accepted by all. Joining Randy Abbey today, Thursday, October 14, 2021 on Good Morning Ghana, Sam George Nartey, the main sponsor of the anti LGBTQ+ bill also confirmed that some MP are being threatened with visa denials.

According to Sam George this is true. He noted that a female diplomat has placed a call to a speaker and at least one signatory asking him to withdraw to from the bill. Sam adds that the MP has been denied a visa after he was called to withdraw from the bill. He explained further that Parliament has sent in applications to the American Embassy for dates for travels for some MPs. However, the embassy has declined to give a date. Surprisingly, MPs not associated with the bill have been given dates and visas but those associated with the bill have been denied dates.

Sam concluded that it is America that is using this cheap form of blackmail because no European country is doing same. He called on the Americans to respect the wishes of Ghanaians. He was firm in saying that the bill will be passed no matter what.