Stop It: What Happened In 2020 Will Never Happen Again- NDC Sec. To NPP's Com. Director 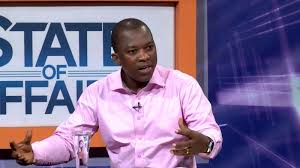 The Greater Accra Regional secretary for the National Democratic Congress, Theophilus Tetteh Chaie has told NPP's Communications director, Yaw Boabeng Asamoah on Asempa FM Ekosiisen program today that, he should stop "miscommunication" for what happened in 2020 will never happen in again, after Ken Ofori-Atta has been approved as finance minister by the vetting committee in the August house of parliament.

Teeth Chaie stated on the show that NPP like doing propaganda after Communication director for NPP and former member of parliament for Adenta constituency, Hon Yaw Boabeng Asamoah said that NDC is fighting for common goal in parliament but they're not fighting for Ghana.

According to NDC Secretary, in 2020 and the first term of NPP, they did a lot of corruption and nepotism which NDC did not react much to and he is giving out the signal after Ken Ofori-Atta is being approved by parliament again that, they will be hard on NPP and what they did in the past will not happened again.

When asked by the host why NDC MPs couldn't meet their National Executiveutive Committee to take steps on some issues before going to parliament to approve ministers, he said that some decisions in parliament comes as emergency decision to deliberate on in parliament and they cannot do anything about it. For instance like how Bagbin and majority leader crash in parliament last week.

Yaw Boabeng Asamoah who was interrupting the NDC Secretary tried to say something which landed him into the statement made by NDC Secretary.

"You know that you're Communication director and what you're saying is not true. Sometimes you miscommunicate and you must stop it because sometimes you said something which your own party comes to say otherwise. OB am I lying? Yes so he must stop all the propaganda against NDC and I will remind that what happened in 2020 will never happened again. As times goes on we must have an effective communication with our MPs in Parliament because it's the parties that create MPs, and the same parties that filed on behalf of the MPs" he added on the show.