Dear Afia Pokua, With All Due Respect, Your Understanding Of Fix The Country Is Problematic.

By Cityzen_Vigilante (self meida writer) | 23 days 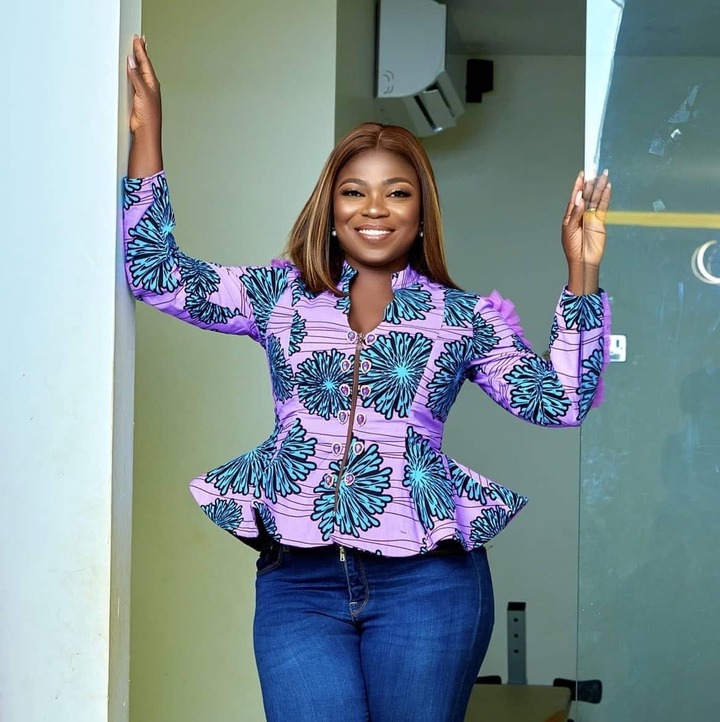 Dear Afia Pokua, you are one of my most admired media personalities in the country because of your charisma and honesty in discussing national matters. I really do hope that this article finds you well. I have always followed your programs since your Adom FM days and I continue to do so. I urge you to continue with the good works I have always known you for.

Like the saying goes; even twins disagree with each other sometimes and with your leave, I wish to espouse my disagreement with you on an important matter in this country.

It is about the "Fix The Country" Movement. Unfortunately, I do not know whether you are against the movement or for the movement but your recent posts on social media and accompanying captions suggest to me that, you do not fully support the movement or your support evolves.

Before I proceed, I just want to suggest to you that you do not fully comprehend the rationale behind the "Fix The Country" Movement and the kind of relief they seek. Interestingly, people are only classified as members of the group by virtue of the fact that they want the country to develop and for the right things to be done for a better country. And so, if the definition of a "citizen" in the constitution and the duties assigned to every citizen as enshrined in the constitution is anything to go by, obviously, everyone in the country could be classified as a member of the "Fix The Country" Movement. If anyone is doing something different and it is in contravention of his/her duties as stated in the constitution, then that person is an enemy of the state and cannot be said to be calling for the country to be fixed.

My worry with your posts is the fact that you post videos that clearly are problems or challenges that are among things the Movement wants to be fixed and then caption it as though it is the same Movement that is inciting people to do the same.

I want to emphasize that in the UK and US, people are not born discipline and that is why there are security personnel and courts. They have a system and laws that are applied effectively without fear or favor. 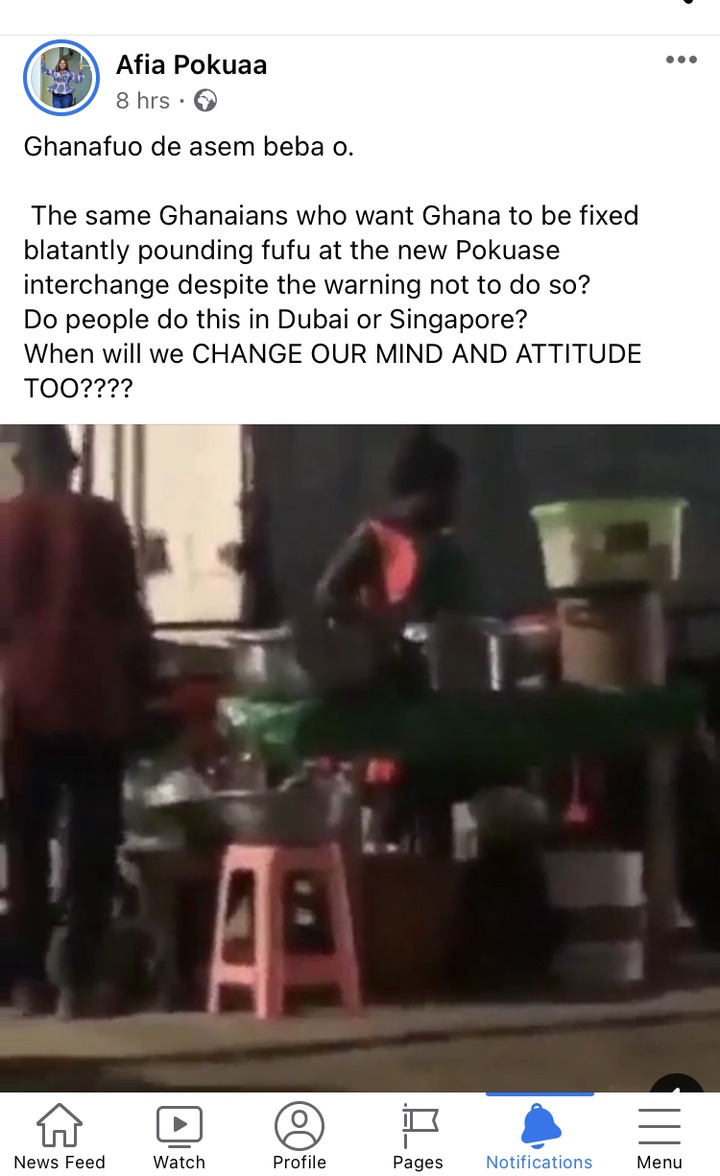 I am quite surprised that you seem to compare the system in Dubai and Singapore to Ghana. Dubai and Singapore have more accommodation facilities that outnumber their population. It is a crime to be seen sleeping outside. In Dubai, you dare not litter outside because the police would be called in just a minute to deal with you. Can you say the same about Ghana?

What did you do when you saw the man pounding the fufu under the interchange? Obviously, you did not call in the police because you probably thought it was too petty or not a police matter because it obviously would not go anywhere but you quickly posted on Facebook to call out the "Fix The Country" movement for calling for the system to work. You never called out the authority in charge of the interchange to get to work. Doesn't that make you a part of the problem when as influential as you may be, you see wrongs been done and you only post it on social media and criticize others who want the same problems to be dealt with?

For your information, it is not every Ghanaian who supports the "Fix The Country" Movement because for them, all is well, and for others; they do not really care what happens in the country.

Your other post indicates your misunderstanding of calls and after-effects if calls of the "Fix The Country" movement are heeded to is a video purporting to show a driver trying to escape traffic by using the shoulders of the road with the caption; " Those who shout the loudest; the system is not working, fix it, are those who blatantly refuse to obey simple traffic rules. The system needs fixing but some of us need fixing too". 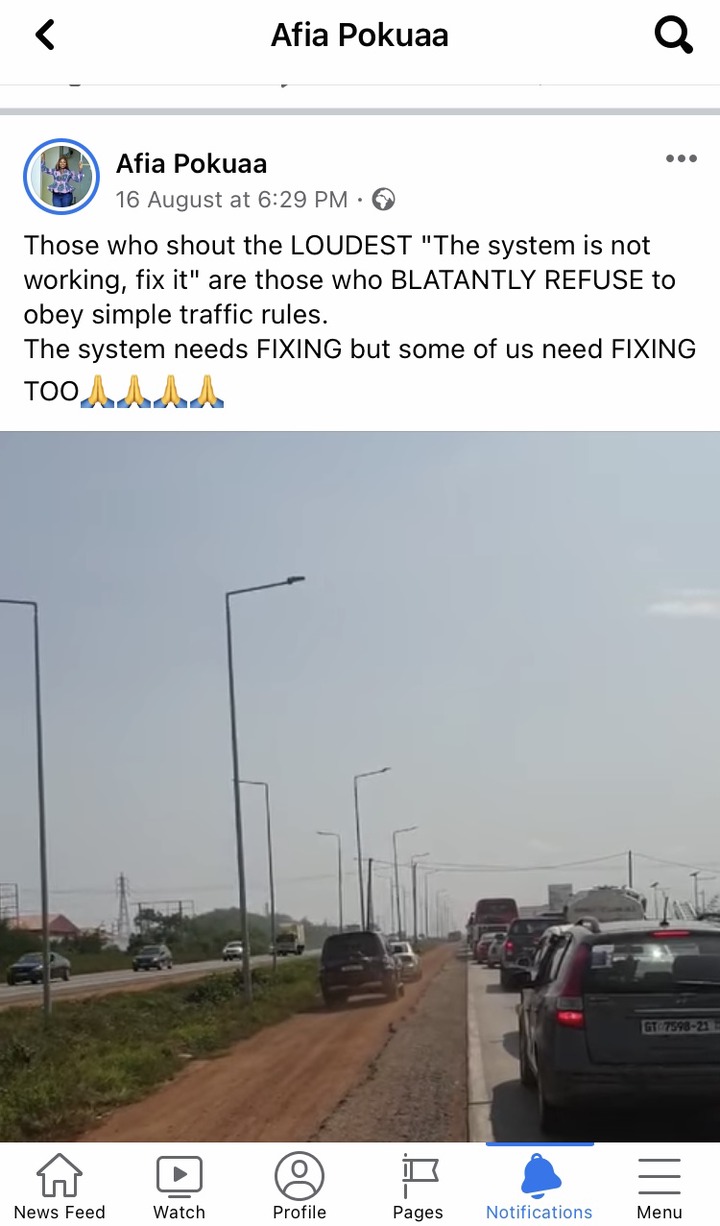 You need not worry about the people fixing themselves. Fixing the system would be strong enough to fix the people. When we say fix the system, it includes effective laws that would put the people in line. When the system is good and the laws are working, there would be no room for indiscipline. The countries we look up to did not do any magic to get to where they are. Their leaders are forward-thinking, they carry the citizens along, have an effective national development plan, have good constitutions, an enabling environment, and effective laws.

In our situation, we have grown in a broken and indiscipline system and until we get serious about fixing the country in all aspects including economic, security, accommodation, among others, the current system would continue to frustrate us and render most of the people indiscipline because a hungry man is an angry man and you cannot ask that man to do right.

I do not know how you identify people who misbehave as the same people who "shout" for the country to be fixed but I know you know this country in its current state needs serious fixing because you have been moving around the country to help students and families in deprived communities. By your deeds, you are a member of the movement so stop discouraging us and accusing us of being the same people engaging in acts of indiscipline. Regardless, we need a fixed system to guide us because we are fallible.