NDC's Dorcas Affo-Toffey Is Runing Away From Her Case; Dismiss Her Appeal- Petitioner Tells Court

By Blind_Justice (self meida writer) | 2 months 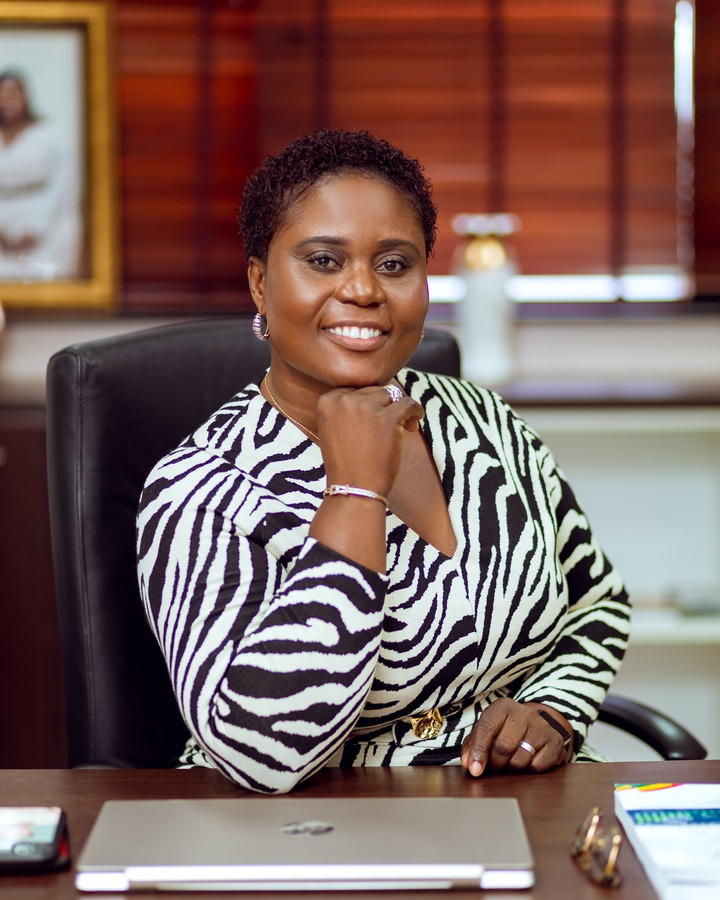 The Member of Parliament for Jomoro, Dorcas Affo-Toffey has been hit with some objections to an appeal she had field against an order by a Sekondi High Court which is compelling her to produce documentary evidence of her renounced Ivorian citizenship. Joshua Emuah Kofie had been 'spiking' the Jomoro MP with a petition challeging her legibility to hold herself as the people's representative for Jomoro Constituency on grounds that she holds multiple citizenship.

The MP was per a ruling by the court presided over by Justice Dr. Richmond Osei Hwere order she avails documents that evident her renounced citizenship to Ivory Coast on June 30, 2021 but a smart move was taken by her lawyers to appeal that order citing abuse of discretional power on the part of the judge.

In a response to writ of appeal [which was filed on 29 June 2021] to stay execution of the case, Mr. Emuah Kofie is contending in an affidavit filed on 13 July 2021 that Hon. Dorcas Affo-Toffey is simply playing gymnastics with the substance of the petition and the orders of the court with an appeal. According to him, the MP's appeal has no legal basis to be upheld as she had not been able to raise sufficient and convincing arguments to support her claim that she had not acted in breach of Article 94 (2) of the 1992 Constitution, section 9 (2) (a) of the Representation of the People's Act 1992 (PNDCL 284), and Regulation 8 (1) (a) of the Public Elections Regulations 2020 (C.I 127); as invoked by the petitioner.

He is pleading the court to strike out the appeal on grounds that it incompetent and without merit. Mr. Emuah Kofie stressed that the MP is just delaying proceedings by running to the court if appeals, and to cover up for her failure to mount potent defense to exonerate herself of the claims made against her. 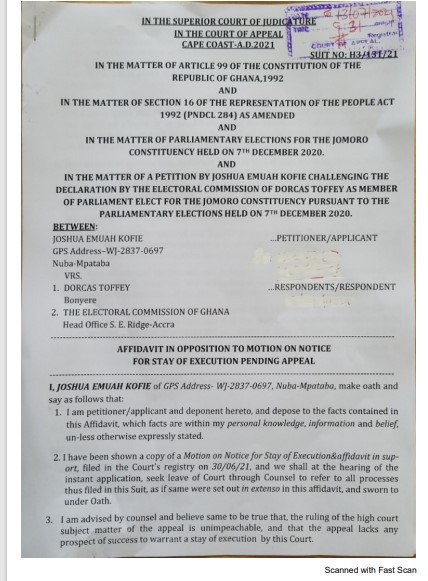 “It is rather bizarre for applicant to go this length to evade the production of a document she claims does not exist. If there is no documentation to evidence applicant’s renunciation of her Ivorian Citizenship as she stoutly maintains, then she humanly cannot produce any such document and there will be no prejudice to her position in which event, the order would otherwise be meaningless and incapable of effectuation.”

He emphasized that it would be in the court's interest to dismiss her case given that the Sekondi High Court competently executed the orders granting the Appellant [Dorcas Affo-Toffey] an opportunity to prove she had on admittance indicated possessing an Ivorian citizenship, and had renounced it accordingly before filing for nomination and contesting for the Jomoro Parliamentary elections in December 7, 2020.

Mr. Emuah Kofie prayed the court heeds to his objection so as to avoid an abuse of process by the MP.

“I am further advised by counsel and believe same to be true that, Applicant has woefully failed to establish an exceptional and/or special circumstance, to warrant a stay of execution of the court’s order for production and inspection. 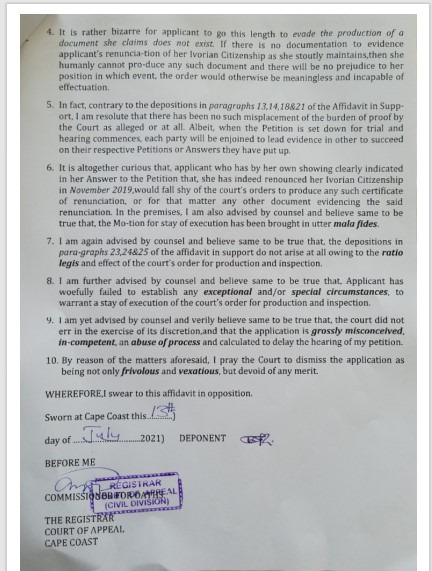 “I am yet advised by counsel and verily believe same to be true that, the court did not err in the exercise of its discretion, and that the application is grossly misconceived, incompetent, an abuse of process and calculated to delay the hearing of my petition," he stated.

It is not established yet when the court will convene on this matter but the issues raised thus far are quiet interesting. It is among two other election Petitions being handled at the high courts; the Essikado-Ketan [ Dr. Ayensu-Danquah Vs Joe Ghartey and Electoral Commission], and Tarkwa Nsuaem [Justice Abban Vs George Mireku Duker and the Electoral Commission].

Truth Must Be Told; The New Hearts Of Oak Jersey Is Not Nice Kraaaa

Try And Learn How To Dress, Much Of Your Credibility Hinges On It - GMB Judge Dzigbordi Speaks