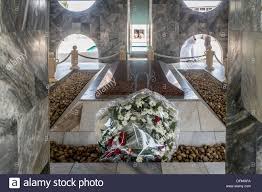 Born in September 1909 at Nkroful of the Republic of Ghana, Dr. Kwame Nkrumah was fathered by a goldsmith, with his mother being a retail trader. He started his basic school at the Roman Catholic Elementary School in Half Assini. He proceeded to Achimota College after which he taught in the Roman Catholic Missionary School at Elmina and Axim.

Dr. Kwame Nkrumah pursued further studies in the Lincoln University and University of Pennsylvania, all of the United States of America. 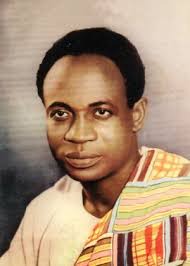 He discharged his duties diligently and won the heart of the masses. However, in 1948, the was a riot that lead to some destructions in the country. Nkrumah and some other leaders of the UGCC; who later became known as "the big six" , were arrested.

Nkrumah broke away to form his own party, The Convention People's Party in 1949.

Nkrumah's CPP won the first elections held in the Gold Coast in 1951 and subsequently became head of government business in the succeeding year.

He became the Prime Minister of the country and subsequently the first President in 1960. Nkrumah's style of leadership was described as authoritarian, as he was accused of causing the arrest of his political opponents. He became unpopular with the people and his government was overthrown in 1966, while he was away to Beijing. Having realized power was seized from him, he took asylum in Guinea.

Nkrumah eventually died in Bucharest, Romania, in 1972. Since Nkrumah was given the title co- president by President Toure of Guinea he was buried in Guinea. Upon a lengthy discussion between the governments of Ghana and Guinea, his body was then brought and buried in Nkroful, his home town.

The remains of the former president were then transferred to a large national memorial tomb in Accra.

Show That You Value Your Relationships By Doing The Following