The debate on the private ANTI-LGBTQI bill presented for discussion by the lawmakers seems to be sparking new controversies day in and day out. Despite the massive amount of support that Ghanaians and other politicians have thrown behind the bill, the opponents remain resolute in their assertions that it is discriminatory and intends to breed hate in the country.

Since the inception of the bill, many diplomats, professors, clergymen and politicians have jumped to its defense, placing emphasis on the ravaging effects the bill has on the moral fibre of the Ghanaian society. However, far from the concerns raised by the majority of Ghanaians, a team of respected professionals including lawyers, professors and social experts believe in a fight to protect the minority of Ghanaians who are indulged in the LGBTQI practices.

In a new development, outspoken Ghanaian based American investigative Journalist and founder of the Loud Silence Media, Kevin Ekow Taylor has responded to the Parish Priest of Christ the King Catholic Church who doubles as founder of Ghana's Lepers Aid Committee, Father Campbell after he declared his stance and shared his opinion on the LGBTQI phenomenon.

The firebrand broadcaster has expressed worry over the comment made by the man of God and described it as made out of cowardice. According to him, the comment has no relevant and discernible interpretations, calling on Father Campbell to come out and properly explain the rationale behind his statement. 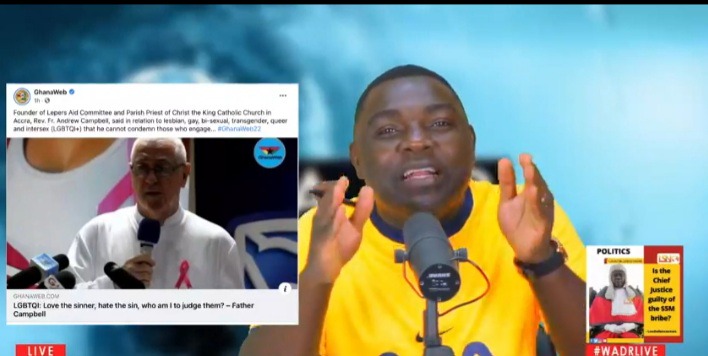 Speaking further, Kevin Taylor indicated that many men of God are in fear to declare their stance because of the fear of their visas after some lawmakers who are proponents of the bill were denied their Visa. Kevin Taylor believes that it takes boldness to morally describe and condemn practices that are immoral per ones belief. Concluding his remarks, he indicated that Father Campbell's comment appears like a "father who does not eat pork yet reccomends to his children."

He added, "Father doesn't want any problems. He is acting like a defensive attacker. What does he mean by his comment that we should hate the sin but love the sinner? He wants to appear neutral because we cannot understand his statement. You're not being clear Father, what is your position?"