By Ghana_News (self media writer) | 9 days ago

Day in and day out, many voices are added to the already known ones that have spoken on the LGBTQI brouhaha in the country. The debate continues to receive condemnation from some section of Ghanaians whilst others have also emerged to quash the bill presented by Honourable Sam George to Parliament.

Presently, the dissenting voices led by some prominent Ghanaian professors have also presented memos to parliament calling on the lawmakers to rubbish the bill. That notwithstanding, the majority leader Honourable Osei Kyei Mensah Bonsu's support for the bill gives a glimmer of hope for Ghanaians who have lamented over the practices.

Earlier today, outspoken Journalist and host of the Onua Maakye show, Captain Smart has added his voice. He has indicated that he disagree with the dissenting voices on the bill, stating categorically that the legalisation of the LGBTQI and its related practices is an affront to the much-vaunted Ghanaian customs and family values. 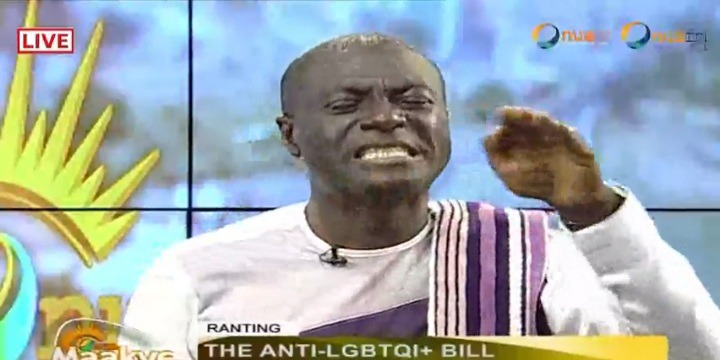 According to Captain Smart, the LGBTQI is an abomination and called for normalisation of the practices to be defeated. He believes that laws should be made to ban the practice in the country, with punishment meted out to people who would be caught in the act.

Explaining the rationale behind his comment, he indicated that laws would be passed to punish the pro LGBTQ advocates if he was the President. He angrily fumed over the opposition from Akoto Ampaw and his cohorts on the bill. Captain Smart expressed optimism in parliament to unanimously pass the bill to 'save' the country.

"If I were the President of Ghana, the discussion of the LGBTQI would seize. You cannot even mention the name because it would be an abomination in this land to practice it. You'll simply be hanged to death, sentenced or fined. We cannot allow something like that in our land."