The Former President John Agyekum Kufour the backbone of the New Patriotic Party (NPP) has disclosed that he has been a father the same year the Vice president Mahammud Bawumia was born.

The former president John Agyekum Kufour was responding to the allegation that he endorse the vice president Mahammud Bawumia as the candidate to lead NPP in the 2024 general Elections.

He said he has never endorsed Bawumia or any other candidate for the upcoming NPP flagbearership race.

He noted that in other for the party to break the eight they should be devoid of coercion machinations so that the candidate who will emerge first could command respect and support from the Ghanaian citizens in other to win power.

“This should be devoid of coercion and machinations so that the eventually selected nominee, coming out of the uncompromised free will of the voting delegates, can easily command the support and respect of all party faithful, and indeed, other Ghanaians sympathetic to our cause towards ‘breaking the eight.” He stated. 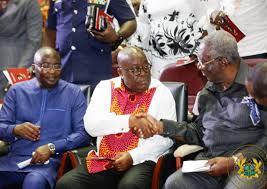 Below is the statement of the former president that made people believe that he endorses Bawumia.

“Let me single out one person; he is also a father, but I can claim that he happens to be my son too, and that’s the Vice-President sitting right by me” - former president John Agyekum Kufour.

“But you may not know that I started being a father in 1963, and that happened to be the year the Vice-President was born".