Yesterday, November 26, 2021, Ghanaians were surprised by what transpired in Parliament during the voting for the budget. The incidence has received massive public attention and caused uproar on social media as many Ghanaians have shared mixed reactions. Many Ghanaians have expressed disappointment over the attitude of the majority while others have also jumped to their defense.

In what can be described as a disappointment, prior to the voting, the majority side in Parliament was empty which made the speaker suspend sitting for over 30 minutes. However, the majority refuted all allegations made by the Minority MPs suggesting that they had made decision to vote on the budget.

Interestingly, the 137 members of Parliament from the majority Caucus in Parliament staged a walkout over their own budget due to certain issues that emerged before the voting. It is sad to note that, the speaker allowed for sitting to continue and voting was done by the 137 lawmakers from the minority Caucus despite the absence of the majority MPs. 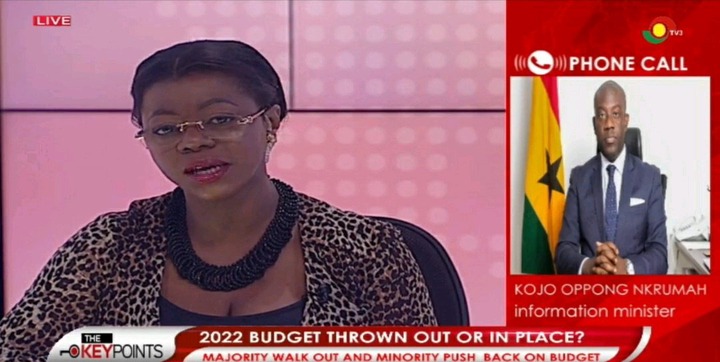 Earlier today, November 27, 2021, the Minister of information who doubles as the Member of Parliament for Ofoase Ayirebi constituency, Honourable Kojo Oppong Nkrumah has waded into reactions concerning the rejection of the budget. Oppong Nkrumah has boldly registered his resentment over the processes that led to the voting in Parliament.

Speaking in an interview on TV3's KeyPoints show, Honourable Kojo Oppong Nkrumah believes that what happened in Parliament is illegal and unexpected and the majority is considering an attempt to storm the supreme Court for a review. According to the lawmaker, he was surprised about the conduct of the Speaker of Parliament Alban Bagbin who allowed for the sitting to continue despite the brouhaha.

He also indicated that the budget being rejected means government's good plans for Ghanaians have been restricted. He stated categorically that the majority would pursue all means available to get the budget reviewed and voted again. He finally called on Ghanaians to remain resolute as majority takes bold steps to get Parliament to resit over the budget.