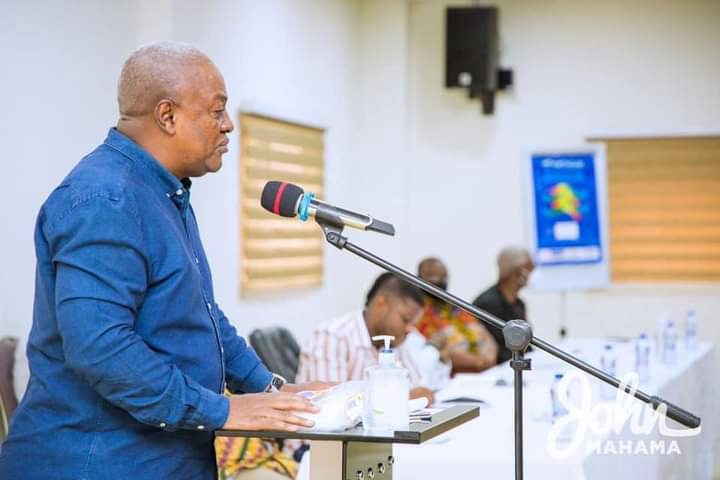 Political parties are preparing towards 2024 election and Ghanaians are making their selection out of the likely people to contest election 2024 for each political party and some people are predicting former President, John Dramani Mahama to lead the NDC because of his matured Politics and good governance he left behind which keeps speaking for him.

Many people who insulted former President, John Dramani Mahama have been seen begging for forgiveness from him because NPP's leader, Nana Addo Dankwa Akufo-Addo has "disappointed" them and they thought Mahama was far better than him.

Today, NDC has hinted that former President, John Dramani Mahama has opened the 3 days Communicator retreat for NDC at Ho in the Volta region and it was a joyful thing for NDC supporters seeing their leader out again after losing 2020 election which was sent to supreme court.

According to him, if John Dramani Mahama failed to listen to them, they will make him and the Celebrities in his Government "uncomfortable" should if he win and they will not be happy with him.

"From today onwards, if any politician comes to power and spend a dime on these so called celebrities in the name of endorsement, i swear we will make the position uncomfortable for them" he said in the first place.

He told Ghanaians that "MARK_IT! JOHN DRAMANI MAHAMA. it's evidently clear that 2024 is yours and if your luck shines and you win power and spend a dime on these guys, i swear you will regret taking that action in your life."

He told former President and the NDC that "now Ghanaian youth are mature. We are able to analyse things by ourselves. The era where people were being influenced by others brand and position is gradually becoming a concert party"

He however advised John Mahama that "Learn from your mistakes and focus your attention on making greater impact in the lives of the people and transforming Ghana. If you win power and gather any hungry celebrity around you with the ultimate aim of shielding any mess, I swear you will face a heavy blow by the people's power"

He added that: "GET IT CLEAR THAT, If you win, its because majority got disenchanted in the erstwhile administration not because any celebrity influenced anyone to vote for you. That celebrity campaign, endorsement shid no "yagae!!!" Ghanaians now endorse hard work and anyone closer to MAHAMA should advice him on that. We seriously want improvement in the lives of every single Ghanaian but not celibrity venerations and twaddles. GHANA B3Y3 YIE. We will force the front liners to #FIXtheCOUNTRY! GOD BLESS MOTHER GHANA."

But another Ghanaians also reacted that: Rescuing which Ghanaians? You want to come to power to rescue your family and friends. Your party and yourself have wasted our time and resources for 27 years and you never did anything to rescue us so how can you rescue us in a 4 or 8 years term? That's a fallacy Mr Ex President. Ghanaians are discerning. We need a fresh leader with vision to resue this country. No! You have nothing more to offer.

It becoming clear that Ghanaian youths are no more interested in the money spent by Politicians during campaign seasons. They have seen that it's a waste of time if they could have used that money to developed the country instead.