Members of the Fix the Country group are currently at the forecourt of Parliament to demonstrate against approval of the 2022 budget statement which was presented by the Finance Minister, Ken Ofori-Atta. 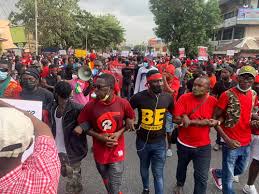 The leadership and the conveners of the #FixTheCountry will today, Friday, November 26, 2021, hit the streets of Accra to protest against some of the policies read in the 2022 budget.

The Finance Minister Honourable Ken Ofori Atta in reading the budget announced the implementation of a 1.75% tax on all electronic transactions. Thus mobile money transactions.

The Finance Minister also announced a 15 per cent increase in government services.

“Electronic transactions including, mobile money payments, bank transfers, merchant payments, and inward remittances will be charged at an applicable rate of 1.75 per cent, which shall be liable by the sender, with the exception of inward remittances which will be borne by the recipient,” Ken Ofori-Atta announced.

But, the movement is happy about the moves by the government and are therefore doing the demonstration to call on the members of Parliament to reject those proposals.

One of the conveners of the movement, Benjamin Darko in an interview granted on Citi News before the demonstration said the group will submit a petition to Parliament.

He further explained that the Executive can only propose but it is Parliament that has the authority to reject or accept those proposals and implement them on Ghanaians.

“We are going to submit a petition to the leadership of Parliament. We believe that the Executive has the authority to propose but Parliament is the only arm of government that has the audacity to make those proposals come into reality.”

“That is why our laws says Parliament has the audacity to implement taxes and levies and it is not the obligation of the Executive to establish the power of implementation.”

However, the police service in a press statement issued last night stated that it has put in place maximum preparations for the demonstration.

“The Accra Regional Command has made maximum arrangements for the #FixTheCountry demonstration which is arranged to take place on Friday, 26th November 2021,” the police said in the press release.

The conveners in August this year organized a similar demonstration calling on the government to fix the country which was a massive demonstration to drum home concerns about the state of the economy after several failed attempts to protest.