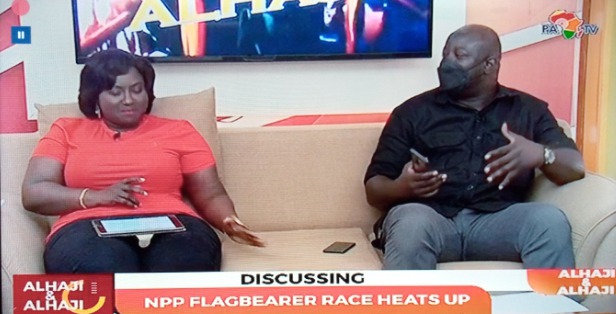 On today's episode of 'ALHAJI & ALHAJI' on Pan Africa television, a member of the communication team of the NDC, Margaret Ansei ( Magoo), has taken a swipe at President Akufo Addo for introducing Alan Kyeremanten and Afriyie Akoto to the King of the Ashanti Kingdom as people contesting for the flag bearership of the NPP. According to her, it is too early for the concert party from President Akufo Addo. He should concentrate on serving his mandate as the president of Ghana and leave politics to those mandated to do so.

According to Margaret Ansei, she was expecting a party chairman or a party forum where party executives will make such announcements of persons seeking to lead the NPP, but not President Akufo Addo.

Margaret Ansei indicated that at this moment, we need something serious and important to the ordinary citizen from President Akufo Addo, but not the jokes that he went and shared at the palace of the Asantehene.

"We needed things that we could touch. It could have been something like; Nana, I'm here to commission the Kejetia phase two or the Afari hospital. These are the things we expected from President Akufo Addo to tell us."

Margaret Ansei advised President Akufo Addo to leave these kinds of statements to the persons such as the Wontumi's and the John Boadu's.

"It is too early for the concert party because we are in a serious crisis as a country. Everything is in a mess, so when i see our president and he is in such a playful mood as if he has nothing at stake, it sickens my heart. It's so appalling."

She stated that Instead of President Akufo Addo Commissioning things that the people can be identified with, he went to the Asantehene to commission ministers. The ministers that have been with him, and we've not seen any impact from them.

Margaret Ansei added that it is too early for President Akufo Addo to start the conversation about his successors. He is our president and not a chairman of the NPP, so he should behave as such.