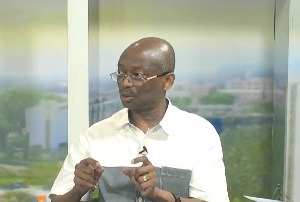 Veteran Journalist, Abdul Malik Kwaku Baako has waded into the debates as to which government is responsible for the Euroject hospital project.

An Egyptian company, Euroject De-Invest, was contracted by the Government of Ghana in 2008 to construct nine hospitals including a military hospital.

But the NDC also claimed its secured funding for the same project in 2014 and cut the sod for construction of the same.

He explains that the Euroject Project was initiated by former President Kuffour who secured the funding before leaving office in 2008.

However, all the governments that have come after him have at different points in time played a role to ensure the project comes to fruition.

In a Facebook post, Mr Baako, says he is being forced to speak on the issue for the second time because of the "needless and unwarranted" controversy by members of the two parties.

"In spite of the abundance of material of evidential value underscoring the genesis and trajectory of the Project under reference, it appears there's still some controversy relative to who did what, when, where and how to actualise and sustain the evolution of the project to date”, portions of his post read.

He added that "Honestly, but for the tendency of 'political elements' across the political divide, who are prone to claim exclusive credit relative to this and other projects, methinks the controversy is needless and unwarranted.

“However, in an environment of competitive partisan politics, it is virtually impossible to impose an injunction on this "subculture". Hence my decision to set the records straight", he said.