Alex Fingers Nana Addo on The LGBTQ Bill: Check Out The Mixed Reactions From Ghanaians

By Wysopera (self media writer) | 8 days ago The debate on the bill placed before parliament on the Lesbians Gay Bisexual Transgender and Queer has reached the doorsteps of the president of the Republic of Ghana, Nana Addo Dankwa Akuffo Addo.

It can be recalled that the former president of the Republic of Ghana, Professor John Evans Atta Mills have made it clear in his statement that he would never accept or legalise the practice of LGBTQ in Ghana.

As the current president of Ghana, Nana Addo Dankwa Akuffo Addo has taken the seat of presidency, most Ghanaians have been wondering whether or not he would support the LGBTQ agenda.

After an interview with the Al Jazeera media station in 2018, President Akuffo Addo was criticised for not emphatically stating his stance on the issue of LGBTQ. However, in a statement released by Eugene Arhin, the Director of Communications at the presidency, the president has made it clear that the legalisation of LGBTQ would not happen during his term as president.

Alex Vhirus has updated his facebook page today, alleging that Nana Addo is working against the bill that is before parliament. The bill seeks to criminalise LGBTQ activities, and if it is passed into law, anyone who engages in any practice of LGBTQ would face the law. This is the post on his facebook page. 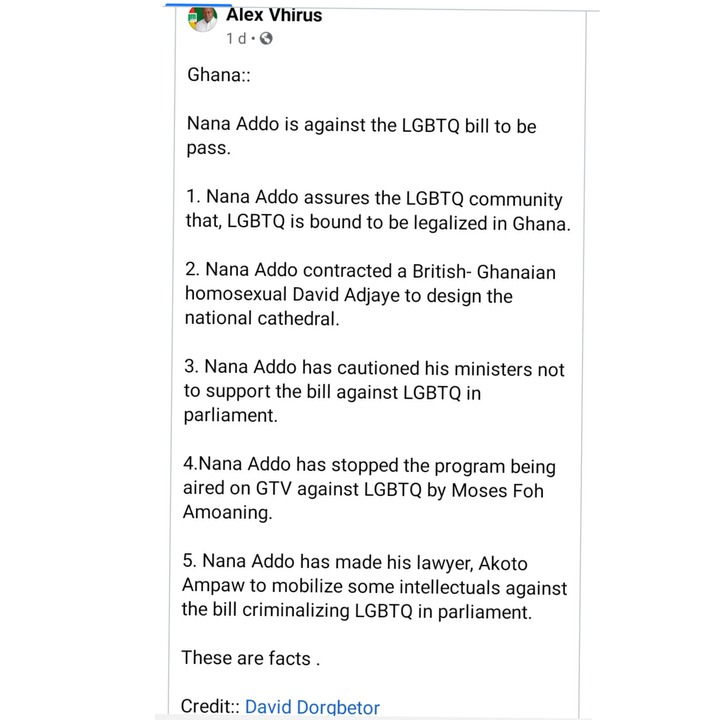 Richard William seems to be surprised at this exposition from Alex. He could not believe that the president would be against the bill since he has an ambition of building a cathedral for God in Ghana.

Kofi Acheampong has detested the viewpoint of Alex Vhirus and have claimed that the former president, John Dramani Mahama also has a friend who is part of LGBTQ.

Donald Atanina seeks to advise that leaders must have a leadership mind. Kwadwo Eric tries to defend the criticism of Alex against the president that he has contracted a gay to design the national cathedral. He argues that that is business, and therefore; has nothing to do with his stance on the LGBTQ bill.

What do you think about this development?

The specific trait of an Imam base on the Islamic perspective