Ofosu Ampofo vs. Asiedu Nketia: Ben Ephson reports that the NDC would run the chairman of the Akans 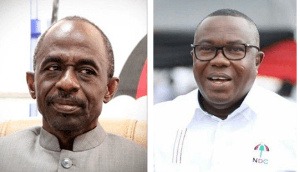 According to Ben Ephson, managing editor of the Daily Dispatch, the opposition National Democratic Congress (NDC) plans to nominate an Akan candidate to run in the general elections of 2028.

According to the pollster's observations, the winner of the next NDC Chairmanship race will probably follow former President John Dramani Mahama as the party's flag bearer, he or she stated in an interview with Metro TV on September 22.

His remarks follow allegations that the current chairman, Samuel Ofosu-Ampofo, and the current general secretary, Asiedu Nketia (also known as General Mosquito), will compete for the position.

Regarding Mosquito's decision to not seek reelection, he stated: "I'm not overly shocked. According to my sources, the NDC plans to elect an Akan as its flag bearer in 2028. These two candidates are both Akans, and I predict that the one who succeeds John Mahama as party chairman would have the best chance of winning the nomination." Asiedu Nketia reportedly met with certain regional executives and informed them that he would be running for national chairman, according to reliable information. They will really number three. Currently, serving Ofosu-Ampofo,

Asiedu Nketia, a former member of parliament and current general secretary, is Nii Armah Ashitey. So, these three, in my opinion, are the candidates who will run for the NDC leadership position, said Ben Ephson.

The pollster stated that Asiedu Nketia and Samuel Ofosu-anticipated Ampofo's run-off will either mark the end for the party before the 2024 elections or the opposite.

Ben Ephson stated that the NDC's 2020 flag bearer should at best be neutral and that the party's behaviour and John Dramani Mahama will be the deciding factors.

"I believe that the party's behaviour in the next years will determine whether it is in good or bad health. The role of John Mahama, whether it be peaceful or not, will be vital in determining if it won't harm the party's unity, in my opinion, "said he.

Asiedu Nketia said on Wednesday, September 21, 2022, on Accra-based Radio Gold that he will not run for re-election to the office he has held since 2005.

He claims that he has two options: he may either resign or run for National Chairman.

"I won't run for the NDC's general secretary job. I have two alternative choices: I can run for the chairmanship, or I can leave politics, "said he.

On December 17, the NDC is anticipated to pick its national executives.