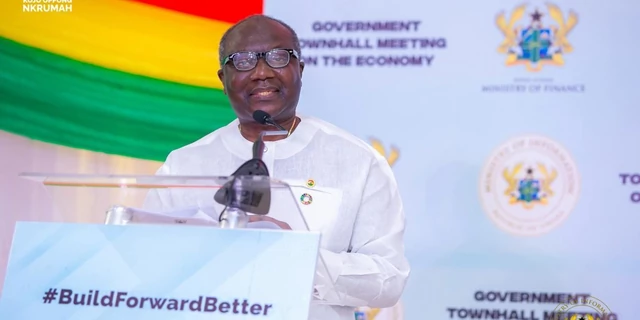 Ken Ofori-Atta is under increasing pressure from Ghanaians to quit as Finance Minister, with his detractors holding him accountable for the country's current economic difficulties.

The minority in Parliament brought a motion of censure against Ofori-Atta.

Seven claims were brought against the minister by the Minority MPs, including extravagant spending, conflicts of interest, financial irresponsibility that caused the Ghana cedi to plunge, and egregious economic mismanagement.

Ad hoc committee made up of eight people from both sides of the house was formed to investigate the motion.

Ken Ofori-Atta is charged with illegally withdrawing money from the Consolidated Fund, purportedly to build the National Cathedral.

The legislators claimed he misrepresented economic statistics to the Parliament "deliberately" and "dishonestly" and made "illegal" payments of oil earnings into offshore accounts.

Furthermore, the Minister has been charged with fiscal irresponsibility that caused the Ghana Cedi, the currency that is currently having the worst performance in the world, to crash, as well as alarming incompetence and terrifying ineptitude that caused the Ghanaian economy to collapse and a severe crisis in the cost of living.

Ofori-Atta is the president Nana Addo Dankwa Akufo-cousin, Addo's who has historically protected the latter from legislative oversight.

However, given that roughly 80 members of the majority have supported the request for Ofori-dismissal, Atta's this might not last for very long.

If the majority of lawmakers follow through on their demand, this event could mean that the finance minister is about to resign.

However, Ofori-Atta has a right to speak out while the parliament discusses removing him from office.

This occurs at a time when Ghana is experiencing a financial crisis and is looking to the International Monetary Fund (IMF) for assistance.

1.5 percent E-levy tax on the transfer amount of electronic transactions was implemented in May 2022.

The goal is to increase tax collections by utilising the quickly expanding digital financial services. The tax structure does, however, allow for numerous exemptions.

For mobile money transfers, the daily and cumulative exemption is set at GHC 100, while GHC 20,000 applies to bank-account transfers. Digital transfers to officially recognised businesses are exempt.

Following Ken Ofori-announcement Atta's of the policy, there have been widespread withdrawals.

The panicked withdrawals by customers can be attributed to inadequate education.

Data released by the Bank of Ghana (BoG) showed that in December of last year, mobile money transactions' value decreased by GH3.2 billion.

According to reports, the amount of transactions on the biggest payment platform in the nation declined to GH82.9 billion in December from GH86.1 billion in November 2021, a decline of 3.8 percentage points.

As a result of their clients' refusal to pay the E-levy, mobile money suppliers claim that their operations are in danger of failing.

Four months following the tax measure's introduction, they claimed that the phenomenon has led to a considerable drop in transactions and low income.

After the E-implementation levy's started, the value of mobile money transactions drastically decreased.

On January 4, 2022, the government's policy directive regarding the reversal of the import value drop on 43 particular commodities went into effect despite protests from the nation's trade unions.

The instruction of the 50nchmark value reversal of imported products will be enforced by the Ghana Revenue Authority and its Customs Division (GRA).

Trade unions in the nation have warned the administration that changing the 50nchmark value at the ports could hurt the economy.

Selected items from each of the three categories to which the reversal was applied will be impacted by it.

The cost of cars for residential delivery

product categories to which benchmark values are applied

The home delivery value of automobiles, commodities to which benchmark values are applied, and all other things will be impacted.

The home delivery value of automobiles, commodities to which benchmark values are applied, and all other things will be impacted.

The benchmark policy was implemented by the government in 2019 in accordance with the World Customs Organization's directive for routine reviews of value databases. To reflect the genuine market dynamics of various commodities, selected commodities are benchmarked to the current global prices under this strategy. The protection of local industry as well as issues like health, the environment, and security are also taken into account.

Following the change, many discussions with pertinent parties have been held to come to an agreement on how the policy will be implemented.

The review has an impact on all 43 things on the list.

This means that, in cases where the importer has an invoice for a good with a value that is either higher or lower than the established Transaction Price Database, the Home Delivery Value of vehicles will no longer be reduced by 30%, and the full value shall apply without any reduction for all other goods.

To address the nation's economic problems, the administration of President Nana Addo Dankwa Akufo-Addo made the audacious decision to approach the International Monetary Fund (IMF).

To address the nation's economic problems, according to the administration, a loan from the IMF is necessary.

Despite prior rejections of pleas for financial aid from the IMF, President Nana Addo Dankwa Akufo-Addo gave the Finance Minister, Ken Ofori-Atta, the go-ahead to take action as Ghana struggles with skyrocketing inflation.

According to a request from the Ghanaian government, the IMF's mission leader for Ghana, Carlo Sdralevich, said in a statement that "discussions on a potential programme to support Ghana's domestic economic policies will begin in the following day."

The government of Ghana has recommended the elimination of all road tolls in the nation, according to Ken Ofori-Atta, who was delivering the 2022 budget statement and economic policy to Ghanaians.

He said that the plan would increase output while lowering environmental pollution, which would also lessen heavy traffic.

He recognised that the government's efforts to raise money had been hampered by the suspension of road toll collecting.

He claimed that the decision, which was quickly made in anticipation of the 1.5% E-passing, levy's has now turned into a serious issue, and the administration is having trouble handling it.

Bonds The sale of a 6-year bond and a tap issuance of a 3-year bond, which was slightly undersubscribed, brought in GH 1.9 billion for the government of Ghana.

The two medium-term bonds were sold with a goal of raising GHC 2 billion.

All of the investors' proposals totaling GH923.79 million were accepted by the government.

However, the debt instrument's price was higher than the initial 20.50% pricing guideline.

Ofori-Atta is in a conflict of interest because DataBank, in which he holds a share, is used as the transaction advisor on Ghanaian bonds.

Databank and Black Star Brokerage, businesses connected to Charles Adu Boahen, a former minister of state in the finance ministry, and Ofori-Atta, have allegedly been chosen as the Bond Market Specialists for the issuing of government bonds.

Due to an alleged procedural error, the Supreme Court postponed (sine die) the case in which Ken Ofori Atta was sued for his role in the $2.25 billion bond offering in 2018.