A Plus Sends A Bold Message To Akufo-Addo On TV3 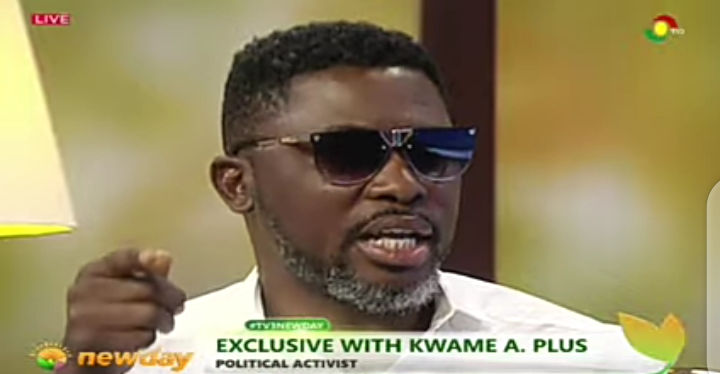 A Political Activist, Kwame A. Plus has sent a bold message to President Nana Addo to sack all his none performing Ministers in his government. He added that the best President Ghana needs is one who can hire and fire.

A Plus visited TV3 today on their New Day program to speak on a lot of issues that are happening in Nana Addo's government. He took time to talk about a lot of issues from tourism, agriculture, the various ministries among other issues.

Some Ministers are not performing well in Ghana currently, do you think they should be reshuffled? Johnnie Hughes asked him.

"No, I don't believe in reshuffling. If Ministers are not performing well, I except Nana Addo I know to sack those Ministers. We don't have much time to be pampering these low-performing Ministers. Look, in this country, it takes someone who can hire and sack to rule this country." He said on TV3.

The Musician and Political Activist then added that the Agriculture Minister, for instance, has been one of the bad performing ministers and he expects President Nana Addo to sack him.

" The Agriculture Minister should be shown the exit door for how bad he's managing the sector. If Akufo-Addo says he's the only President to have invested heavily in the Agric sector, it's true but are we seeing the effects? No because of the poor performance of the Agric Minister. He should be sacked." A Plus told TV3 today.

A Plus in the past week has also been calling on the President to sack the Education Minister for how badly he's managing Education in the country.

Do you agree with A Plus that some Ministers should be sacked?

Which Minister can you point out for him to be sacked by the President? Mention names below.

Do you think Akufo-Addo's Ministers are not performing well like it's expected of them?

What are your thoughts and comments? Kindly leave all of them below and please share this article.