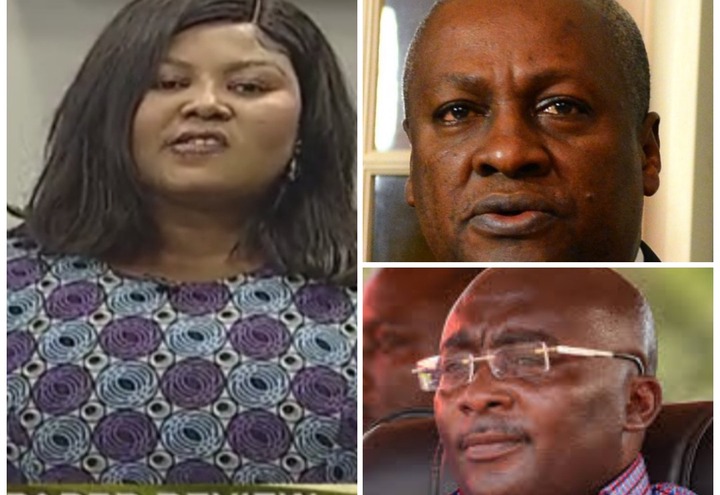 The current state of the country's economy sparked some fire from Onua Maakye female host Yaa Titi on Onua TV today as he fired back to back the current Vice President of Ghana Dr. Mahamudu Bawumia and his economic team for their failures to put Ghana's economy where it's supposed to be.

According to Yaa Titi during former President, John Dramani Mahama's time. She learnt so many comments passed by Dr. Mahamudu Bawumia on how incompetent the his government was. Yaa Titi revealed that Dr. Mahamudu Bawumia passed a comment that John Dramani Mahama and his government were spending all the loans they went to take during their time, and that resulted to them visiting the IMF for bailout.

Yaa Titi continued by saying "Bawumia and his economic team are doing exactly what Bawumia said John Dramani Mahama did during his time". They have also gone for the loans and have spent the money themselves, hence our suffering and bad economic status. What baffles her most is the so called economic team he called a strong team. They have not added any value but just wrecked our economy. Yaa Titi further explained that they have even imposed taxes on Ghanaian individuals who have businesses and on the individuals as whole, but still are not able to best manage the economy. The big foreign companies which we can get huge taxes from have rather been given tax exemptions.

She added that if Dr. Mahamudu Bawumia and his so called economic team thinks it is taxes that could make this economy bounce back to it's feet then they lie bad. Her little economics she did in the high school teaches that, when individuals capacity is developed, it helps boost the economy rather than taking loans. So Dr. Bawumia and his NPP should rethink about what they have done to our economy and put up better measures to cater for it.