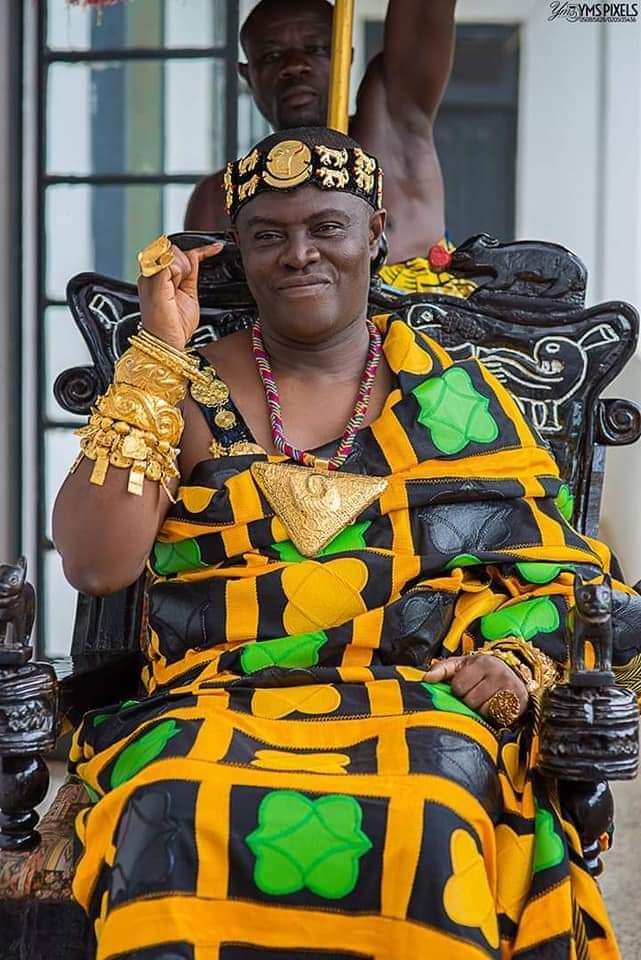 This succession tussle led to a squabble and were finally escalating to a civil war. The Queenmother Nana Yaa Mpobi with her cultural belongings, some royals and a section of the kingmakers(including the Adonten division) had to flee to avoid any imminent disaster. They first sojourned at Awanweneso, and further moved on to settle at another spot at Nyanoase.

Here it is said the Queenmother of Twifo-Heman met them and demanded to know how far they have travelled.

A spokesman of the group answered, “We are from Akwamu where we are faced with a dispute over the installation of our chief. We are Dɔ-wo-manfo, and we have decided to find a new place of habitation”. Dɔ-ɔmanfo literally translated as "people who love their people, or a peace loving people" became Dormaa or Dormaafo. It was because they were a peace loving people that they decided to relocate instead of engage in a civil war.

The journey continued to Asantemanso where Dormaas founded it. At Asantemanso, Asantes attacked Dormaa and ruined their belongings and some of the royals lost their lives. Dormaa had to make a new home, so they buried the royals there and decided to set off.

However, a section of Dormaa people decided to stay behind to look after the tombs of the buried royals. These people stayed behind the bank of the Subin river called Asuegya, which has been corrupted into Asumegya(Esumegya). To wit, the people of Asumegya are descendants of Dormaa. Dormaa then proceeded to Suntreso and founded it, Suntreso started gaining attention. In early 1680s, Asantes again waged a war on Dormaa, this act infuriated the then Dormaahene Kusi(Amoah). So a fiercely battle occured.

Dormaa defeated Asantes, beheaded their king Kwamanhene (now called Asantehene) Obiri Yeboah together with his chief priest Ɔkɔmfo Yamoah of Agona, and also beheaded Dwamena Akɛntɛn of Offinso. This was a great disaster to Asantes because most of the royals were nearly exterminated.

Osei Tutu was at Akwamu and was called to succeed his uncle Obiri Yeboah, he was vindictive, wanting to avenge his uncle's death. He pursued Dormaa from Suntreso. Dormaa headed to Tepa, from Tepa to Bomaa where they founded it. Bomaa means "boa boa wo man" which literally translated as gather your people.

Here the king built for himself and the royals “Aban” a storey building from which he could reconnoiter. The “Aban” soon became closely related to Aprede, a kind of traditional drum. It is said it was the chief’s pleasure, every evening, to listen to the drums for his enjoyment. The throbbing of the Aprede was an attraction to summon the Bomaas and the people from the outlying villages to the Aban. This was the origin of the name Abanpredease.

The Bomaas, now the citizens of Abanpredease later moved on to Kontraagyeso after crossing river Tano. Some of them, however, chose to settle at Abesim(town abounding in cola nuts). Others from Kontraagyeso still migrated a little further to found a town called Kyiraa - “yɛn nkyɛre ha” (we can’t stay here for long).

From Kyiraa, they finally moved toward north-west where they once again encountered the Asantes in a war. Conflicts with the Asantes led to unfavourable circumstances that forced them to seek refuge near the forest belt. From the very outset, they settled at Amaasu and eventually dispersed to cover the large area which they now occupy as Dormaaman.